Vancouver, British Columbia–(Newsfile Corp. – April 1, 2020) –  Cabral Gold Inc. (TSXV: CBR) (“Cabral” or the “Company”) is pleased to announce that it has identified a vein containing visible gold mineralization at the Alonso target. The Company is also pleased to provide a further update regarding the ongoing regional exploration work at the Cuiú Cuiú project in Brazil.

Alan Carter, President & CEO stated “The identification of visible gold in an outcropping quartz vein adjacent to the area of abundant quartz-pyrite boulders at Alonso is an important step forward in identifying the source of the quartz boulders which recently returned gold values of 11.3 to 200.3 g/t gold. Furthermore, the possible presence of a broad mineralization halo extending at least 25m to the north of the main vein structure suggests that the style of gold mineralization at Alonso is similar to the two main existing gold deposits at MG and Central. This further supports the conclusion that Cuiú Cuiú is an emerging district containing multiple gold deposits”.

Recent trenching has been conducted at the Alonso target where a series of large angular quartz boulders returned gold values of 11.6 to 200.3 g/t gold. The trench extended over 31.4m in a NNW direction along the western flank of the alluvial workings where the quartz boulders were discovered. Excavation through a shallow layer of cover located an in-situ quartz-pyrite vein containing visible gold. The vein that is exposed is 1.3m in width, trends E-W and is coincident with a pronounced E-W trending magnetic anomaly. It is not known at this point if this vein is the source of the high-grade boulder samples, since most of the boulders are located up slope from the outcropping vein and are upstream beyond the northern limit of the trench.

A first attempt at trenching 8m to the east of the final site was abandoned, as the site proved to be waterlogged. A composite grab sample of vein material excavated from this attempt returned a grade of 15.8 g/t gold. However, continuous channel sampling was feasible in the revised position shown in Figure 1. The channel sample across the vein interval returned 1.3m @ 7.1 g/t. The southern sector of the trench was barren. The northern limit of the trench terminated within a low-grade halo (4m @ 158 ppb gold). The halo is known to extend further north, with narrow millimeter scale quartz veinlets observed up to 25m north of the main vein structure. Most of the boulders occur upstream to the north and remain untested. 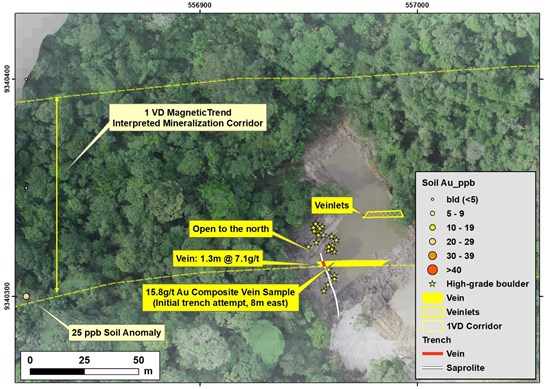 Extension of the trench further to the north was not possible since the ground is currently water-logged. This will be reassessed in the dry season. Achieving continuous sampling to the north across the magnetic anomaly will be important to determine if more than one vein is present to confirm the source. Other mineralized systems such as the existing MG and Central gold deposits at Cuiú Cuiú, as well as the Machichie target, which was discovered during 2019, are known to contain multiple high-grade veins and mineralized halos.

In addition, results have been returned on a number of additional samples of quartz vein float material with six samples collected from an area 950m to the west-south-west, returning gold values of 1.0 to 7.7 g/t gold (Figure 2). These samples suggest the extension of a branch of the Alonso mineralized structure could extend more than 950m to the WSW.

The Alonso area is covered by a thin sequence of recent post-mineral sediments and ferricrete which cover the underlying intrusive rocks and result in significantly reduced geochemical responses. Nonetheless, high levels of gold were returned in pan concentrates from streams for more than a kilometer both west and east of the discovery, and appear to correspond to pronounced east-trending lineaments within the magnetics. 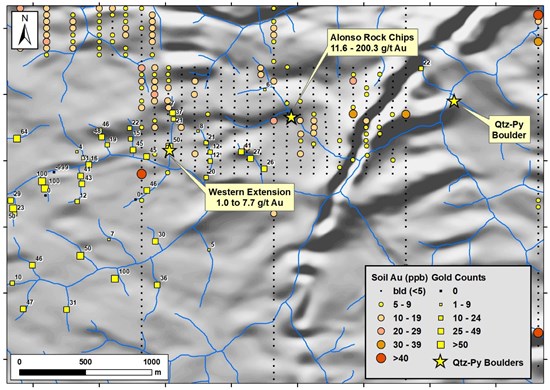 As a result of the Covid-19 outbreak and in order to protect staff and the local community from potential infection, Cabral has temporarily closed both of its offices in Vancouver, Canada and Itaituba, Brazil and all staff are currently working from home. In addition, the Company has suspended all field work at the Cuiú Cuiú project in Brazil for at least 14 days following local health authority recommendations but will continue to provide support to the local community.

The company is providing medical support and supplies to the community of Cuiú Cuiú and continues to maintain a medical outpost in the community to continue serving our local partners, staff and the broader community.

Alan Carter, President & CEO stated, “Our priority is the health and safety of our employees, their families and the local community. Cabral Gold will continue to monitor the Covid-19 situation and adjust plans as the situation evolves. We would like to thank our employees, partners and all stakeholders for their understanding and support, and we look forward to resuming field operations as soon as possible”.

Results are pending on numerous soil, auger top-of-bedrock, and rock samples from the regional reconnaissance exploration program and are expected over the next two months. The analytical lab in Brazil continues to operate but with restricted transport and logisitical options which will result in some delays to the reporting of results.

Gold analysis conducted by SGS method MET150 (metallic screen fire assay). Analytical quality is monitored by certified references and blanks. Until dispatch, samples are stored in the company’s supervised exploration office. The samples are couriered to the assay laboratory using a commercial contractor. Pulps and rejects are returned to the Company and archived. Gold counts in pan concentrates from drainage samples are derived from a set volume (20 litres) of sands and gravels.

Previous Post
Cabral provides further results from Alonso target at Cuiú Cuiú; Acquires RC drill rig
Next Post
Cabral Identifies New Target in Eastern Cuiú Cuiú with gold values up to 82.1 g/t on surface
Menu
This website uses cookies to improve your experience. If you continue to use this site, you agree with it.
Ok