Cabral Identifies New Target in Eastern Cuiú Cuiú with gold values up to 82.1 g/t on surface

Vancouver, British Columbia–(Newsfile Corp. – April 22, 2020) – Cabral Gold Inc. (TSXV: CBR) (“Cabral” or the “Company”) is pleased to announce additional results from rock samples collected as part of the current regional surface sampling program within the eastern part of the Cuiú Cuiú gold project in Brazil, and the identification of another new and previously unknown high-grade target called Medusa.

Alan Carter, President & CEO, stated, “The identification of yet another compelling new high-grade gold target at Cuiú Cuiú further extends the size of the district at least 4km east of the recently identified high-grade Alonso discovery, where surface boulders returned 11.6 to 200.3 g/t gold. The identification of two areas of mineralized rock samples on surface which average 26.0 g/t and 21.8 g/t respectively, and are 330m apart, is significant and highlights the potential for further discoveries in the largely unexplored eastern part of the Cuiú Cuiú concession area. Furthermore, Medusa has a compelling structural location at a flexure within the regional Tocantinzinho fault zone which hosts the +2Moz Tocantinzinho gold deposit located 20km to the south-east, and the Santa Patricia porphyry copper target just 13km to the south-east.”

Following the successful identification of high-grade gold mineralization on surface at the recently identified Alonso target (see press releases dated February 11, 2020, February 27, 2020 and April 1, 2020), Cabral’s exploration teams have been engaged in an aggressive program of regional mapping and sampling east of Alonso and throughout the previously unexplored eastern portion of the Cuiú Cuiú, property (Figure 1). A number of streams in this area are known to have had significant historic placer gold production, and as is the case throughout most of the project area, the source of that gold is unexplained.

This work has led to the identification of additional quartz-sulphide blocks on surface in several other areas, notably an area which has been named Medusa and is located approximately 4km ENE of the Alonso target and 7km ESE of the centre of the MG deposit (Figure 1). Samples were collected from two areas located 330m apart and returned the values shown in Table 1. Of the two groups of samples collected, the eastern most group of 13 samples returned gold values ranging from 1.1 to 82.1 g/t gold and averaged 26.0 g/t gold, and the western most group of 6 samples are located 330m to the west and returned gold values of 5.2 to 50.1 g/t gold and averaged 21.8g/t gold. These samples are also coincident with a gold-in-soil anomaly. 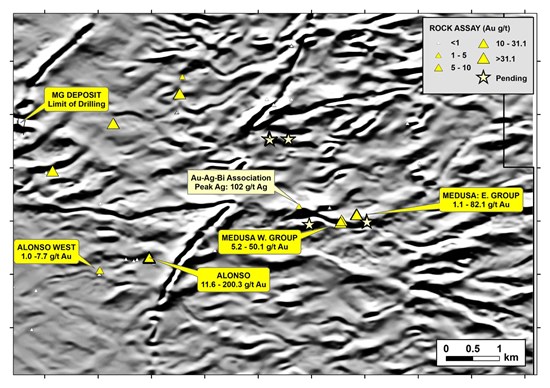 The Medusa target sits within the regional TZ fault system which has long been of interest to Cabral’s exploration team since the NW-SE trending TZ fault system appears to extend at least 200km and is the major controlling fault structure in the Tapajos region. The Tocantinzinho gold deposit (Measured and Indicated resources of 48.73Mt @ 1.35 g/t gold for 2.11Moz) of Eldorado Gold sits within the TZ structure 20km to the south-east, as does the low-grade Santa Patricia porphyry copper deposit located 13km to the south-east (Figure 2). Both the Central and MG gold deposits, as well as all of the targets identified to date at Cuiú Cuiú, are related to second order structural features, but Medusa is the first target at Cuiú Cuiú identified by Cabral which sits within the main TZ fault zone. Moreover, Medusa is located within a flexure in the main TZ structure where the principal orientation of the structure appears to bend E-W. Inflection points in regional structures are frequently the hosts of major gold deposits elsewhere in the world. 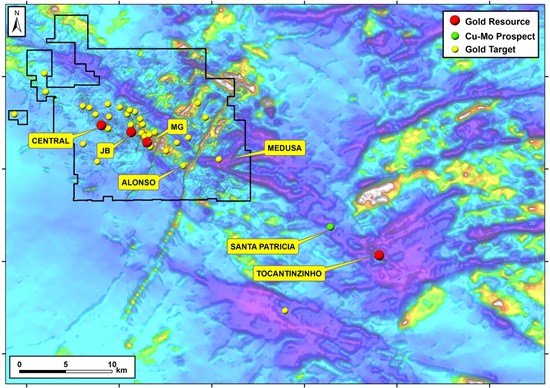 Mark Smith, Executive Chairman of Cabral, stated, “The Medusa target is located exactly where our structural modelling predicted; at a major inflection point in the TZ regional fault structure, and from a structural perspective, is the most compelling of all the targets we have identified at Cuiú Cuiú thus far. We believe that the TZ regional fault structure is the principal control on gold mineralization throughout the Tapajos, and the presence of high-grade surface float material at this location is very exciting. This target, like the recently discovered high-grade Alonso target, will require further work prior to drilling later this year.”

In addition to the above results, anomalous silver and bismuth values were returned from quartz-hematite blocks identified 1.1km WNW of west of Medusa (Figure 1). Of 8 samples collected, gold values ranged up to 1.9 g/t but of greater interest was the fact that the samples were highly anomalous in both silver (up to 102 g/t) and bismuth (up to 1515ppm). This mineral association has not been previously recognised anywhere within the Cuiú Cuiú property area and may be indicative of a porphyry at depth.

Results are pending on additional soil, auger top-of-bedrock and rock samples from the regional reconnaissance exploration program within the eastern part of the Cuiú Cuiú property. The analytical lab in Brazil continues to operate but with restricted transport and logistical options which will result in some delays to the reporting of results.

Separately, the Company wishes to announce that due to circumstances created by the COVID-19 pandemic, it will not be filing its audited financial statements in respect of the year ended December 31, 2019 by the scheduled due date of April 29, 2020 (as required by section 4.2(b) of National Instrument 51-102), nor will the management discussion and analysis covering the same period be filed by it scheduled due date (as required by section 5.1(2) of National Instrument 51-102).

As required by applicable Instruments and Orders published by provincial securities regulators in Canada, the Company discloses the following:

Gold assays at the Medusa target have been determined by SGS method FAA505 (fire assay; 50 charge). Analytical quality is monitored by certified references and blanks. Until dispatch, samples are stored in the company’s supervised exploration office. The samples are couriered to the assay laboratory using a commercial contractor. Pulps and rejects are returned to the Company and archived.

Previous Post
Cabral Identifies In-situ Vein Mineralization at Alonso Target, Cuiú Cuiú, and Expands Size of Gold Anomaly
Next Post
Cabral Gold announces $2M financing
Menu
This website uses cookies to improve your experience. If you continue to use this site, you agree with it.
Ok