Vancouver, British Columbia–(Newsfile Corp. – February 27, 2020) – Cabral Gold Inc. (TSXV: CBR) (“Cabral” or the “Company”) is pleased to provide multi-element analytical results from high-grade boulder samples and provide an update on exploration progress at the recently identified high-grade gold target called Alonso, at the Cuiú Cuiú project in Brazil. In addition, the Company is pleased to announce that it has acquired an RC drill rig which will allow for rapid and cost-effective testing of the Alonso target and other targets within the Cuiú Cuiú project area.

Alan Carter, President & CEO, stated, “Continued reconnaissance work at the Alonso target, where recent sampling of surface rock samples returned values of 11.6 – 200.3 g/t gold, continues to expand the footprint of the Alonso anomaly with highly elevated gold counts in panned stream sediments further to the west and south of the original showing. Furthermore, the recognition of highly anomalous silver and copper values raises the potential of a nearby porphyry source. The acquisition of the ASV ST-50 RC drill rig represents a transformational change in our exploration efforts and will enable us to drill significantly cheaper and more quickly than previous diamond drilling programs. This rig will allow us to not only rapidly test Alonso and other regional targets, but to also fully evaluate the high-grade zones at both MG and Central which have recently returned compelling results.”

Following the recent identification of a series of large angular quartz boulders at the Alonso target at Cuiú Cuiú which returned gold values of 11.6 to 200.3 g/t gold the Company has received results from one additional sample (30002) which returned 82.0g/t gold. The sample was collected at the same location as the other 23 samples reported on February 11, 2020 and brings the total number of samples with results to 24.

The Company has now also received multi-element results on all 24 samples which have returned highly anomalous values of both silver and copper (Table 1). Silver values ranged from 0 – 90 g/t and averaged 31 g/t silver. Copper values were also highly anomalous and ranged from 0 to 1.13% (average of 0.31% Cu) with five samples returning in excess of 0.8% Cu. The maximum value of 1.13% copper is the highest copper value ever recorded at Cuiú Cuiú, and whilst elevated copper values have been returned from the Machichie and Guarim prospects, it is generally rare and represents an interesting development.

Copper is not commonly present in the Tapajos region although Anglo American plc staked 2.5 million hectares in the Tapajos in 2017 following the discovery of a porphyry copper deposit at the Jaca project located 550km to the south. Furthermore, Eldorado Gold Corporation has defined porphyry copper mineralization associated with an 8km NW striking copper-in soil anomaly at the Santa Patricia prospect, located 2.5km NW of the nearby Tocantinzinho gold deposit1. The Santa Patricia corridor is centred 17km SE of Alonso. Serabi Gold plc’s high-grade Palito gold-copper mine is also located along the same metallogenic corridor, 86 km SW of Alonso.

In addition to these recent multi-element results, the Company’s exploration team has completed a detailed soil sampling survey and collected 298 samples over an area of 2km x 0.8km on a grid 100m (E-W) x 50m (N-S) grid (Figure 1). In parallel with the soil sampling work, a number of stream sediment samples have been collected and samples panned from additional drainages surrounding the Alonso area indicating that the gold anomaly in stream sediments is more extensive than originally envisaged and may indicate the presence of parallel structures. Some of the gold counts (>100) were amongst the highest ever found on the property (Figure 2). 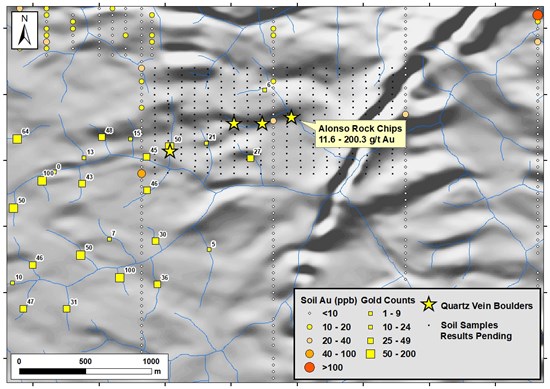 Reconnaissance auger drilling at Alonso testing the top of bedrock, also suggests the local presence of a thin post-mineral cover sequence which may obscure the underlying mineralized bedrock and account for the fact that the geochemical response in historic wide-spaced soil sampling lines was subdued. Detailed auger sampling in and around the high-grade float samples is also currently in progress aimed at further defining the mineralized structure. 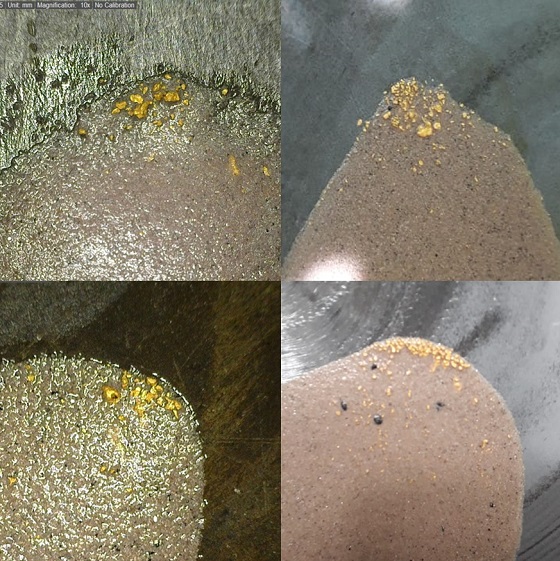 To view an enhanced version of Figure 2, please visit:
https://orders.newsfilecorp.com/files/3900/52877_pic2.png

In view of the very high-grade recent rock-chip results from the Alonso target and the recent high-grade drill intercepts from MG and Central as well as the intercepts returned from the Machichie and Morro da Lua targets during 2019, Cabral has acquired a track mounted ASV Scout ST-50 reverse circulation drill rig (Figure 3) that is capable of drilling holes to a maximum of 200m depth. This will allow the Company to rapidly and cost effectively test the new Alonso target as well as various other high-grade targets on the property.

The rig is second hand but barely used and was acquired for a total of US$125,000 which includes some maintenance costs. The purchase and importation of a new rig into Brazil would cost approximately $US1.1 million. Cabral estimates RC drill costs could be as little as 10% of the cost of diamond drilling, or approximately C$25/metre including geochemical analysis. 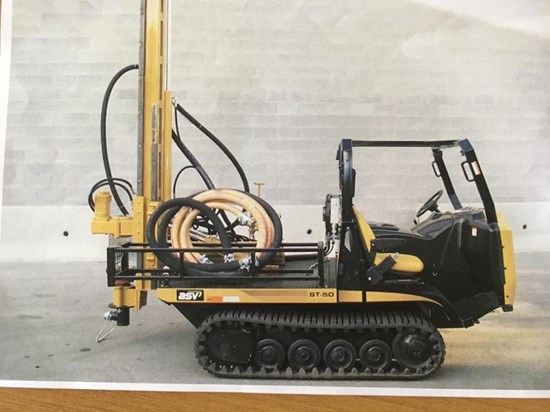 The rig is currently undergoing maintenance in Itaituba but should be available during Q2 2020 and will be used to test Alonso and other regional targets, as well as further drilling of the high-grade zones identified to date at both the MG and Central deposits.

Future Work and Timing of Results

Cabral’s exploration team is continuing to determine the size of the footprint of the Alonso target. Initial analytical results from recent quartz boulders identified along strike as well as the detailed soil sampling grid over the target and more detailed stream sediment sampling, and shallow auger drilling should be received in March 2020. Additional regional results are also expected from the Cilmar area, located 7km north of Alonso, where numerous coarse nuggets have been recently recovered from streams.

The Company wishes to announce that it will be attending the Prospectors and Developers Conference of Canada from 1-4 March 2020 and will be exhibiting samples from the recently identified Alonso target at booth 2831 in the Investor’s Exchange.

Multi-element analysis has been conducted by on pulp from the original rock samples using a four-acid digest in ICP analysis at SGS in Vespasiano (method code ICP40B / ICP40BS) and gold analysis conducted by SGS method MET150 (metallic screen fire assay). Analytical quality is monitored by certified references and blanks. Until dispatch, samples are stored in the company’s supervised exploration office. The samples are couriered to the assay laboratory using a commercial contractor. Pulps and rejects are returned to the Company and archived. Gold counts in pan concentrates from drainage samples are derived from a set volume (20 litres) of sands and gravels.

Previous Post
Cabral Identifies a New High-grade Target at Cuiú Cuiú; 23 Surface Samples Range from 11.6 to 200.3 g/t gold
Next Post
Cabral Identifies In-situ Vein Mineralization at Alonso Target, Cuiú Cuiú, and Expands Size of Gold Anomaly
Menu
This website uses cookies to improve your experience. If you continue to use this site, you agree with it.
Ok