Unusually for Cuiú Cuiú, elevated silver (Ag), copper (Cu) and tungsten (W) values were returned from the principal intersection described above, with a maximum of 27 g/t Ag, 0.1% Cu and 0.06% W. More broadly outside of this zone, the tungsten mineral scheelite, and coarse centimeter-sized molybdenite was observed in veins. Scheelite also occurs locally in wall-rock alteration zones. Values up to 0.17% W, 0.12% Mo and 0.15% Cu were encountered in selected samples throughout the hole. Tungsten was also recognized outside of the higher-grade gold intervals. Given these initial positive results, further multi-element analysis is planned.

This mineral and metal association is consistent with an intrusive related gold deposit model and raises the possibility of concealed intrusive sources within the Cuiú Cuiú project area, which are yet to be discovered.

Detailed drill results from Machichie East are shown in Table 1.

Table 1: Drill results from the Machichie and Machichie East target. The drill hole CC180-19 mineralized interval is open, with the hole abandoned in a saprolite-hosted vein at 40.5m. In drill hole CC183-19, the depth of saprolite is 57.45m; the interval 22.6-29.5m is located in the basal sediments of the transported overburden sequence. 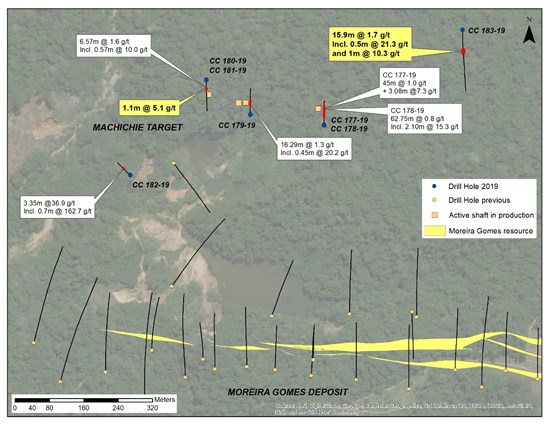 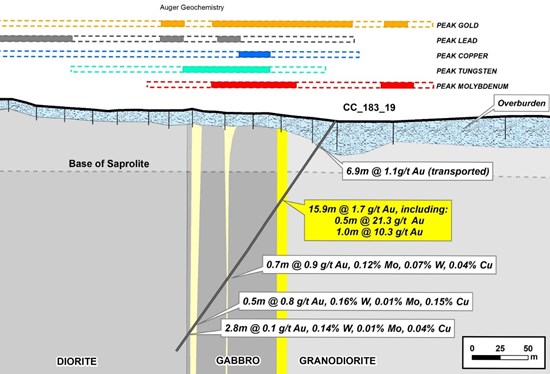 Visible scheelite and molybdenite were also recognized in the Machichie drill core. Given the strong initial Mo and W results from Machichie East, multi-element analysis also is planned for Machichie samples.

Results on four of the five holes which tested the main E-W trending Machiche magnetic-low were released on 28th February 2019 and included 3.4m @ 36.9 g/t gold. These holes confirmed the discovery of a significant new high-grade mineralized zone at Machichie.

Results were pending on just one hole at Machichie, CC-180-19 which was terminated early in saprolite due to a loss of circulation. This hole returned 1.1m @ 5.1g/t gold from 39.4 – 40.5m depth and terminated at 40.5m having encountered the mineralized zone, but failed to fully penetrate the zone. The subsequent more steeply inclined hole CC-181 was drilled from the same platform and did intersect the Machichie mineralized zone.

Drilling has been completed on three additional targets including MG (3 holes), 6 Irmaos (1 hole) and Quebra Bunda (1 hole). Results are pending from all of these holes. This brings the total number of targets tested as part of this initial drill program to five. Reconnaissance drilling is currently in progress at the sixth target Jerimum Cima, which unlike most of the other targets has had some previous drilling. A historic hole at Jerimum Cima intersected 39m @ 5.1g/t gold and the current program will follow up on this intercept. Assay results from these holes are pending.

Alan Carter, President and CEO commented, “the drill results from Machichie East demonstrate the presence of another previously unknown mineralized structure at Cuiú Cuiú which will require further drilling. These results come soon after the recently announced Machichie discovery located 400m to the south-west. We have now intersected two previously unknown high-grade structures from the first two targets of this initial reconnaissance drill program and look forward to results from the seven additional targets that will be tested as part of this drill program”.

The Company owns the Cuiú Cuiú gold project, which covers the largest of the historical placer gold camps in the Tapajós region of northern Brazil, having yielded an estimated 2M oz of gold from the overall 20-30M oz gold produced during the Tapajós gold rush. Placer workings cover over 850ha on the property but are largely exhausted. The few remaining artisanal workers now process gold from palaeo-valley placer deposits and in places exploit high-grade gold mineralization from quartz veins in saprolite (shallow highly weathered bedrock).

Cabral reported an updated NI 43-101 Mineral Resource Estimate in December 2018 totalling 5.9M tonnes grading 0.9 g/t Au (Indicated) and 19.5M tonnes grading 1.2 g/t Au (Inferred), or 0.2M ounces and 0.8M ounces of gold, respectively. That estimate was based on four deposits drilled prior to the cessation of exploration in 2012.

Gold analysis has been conducted by SGS method FAA505 (fire assay of 50g charge), with higher grade samples checked by FAA525. Analytical quality is monitored by certified references and blanks. Until dispatch, samples are stored under the supervision the Company’s exploration office. The samples are couriered to the assay laboratory using a commercial contractor. Pulps are returned to the Company and archived. Multi-element analyses are conducted at SGS using a multi-element digest and ICP-OES finish (method ICP40B). Drill holes results are quoted as down-hole length weighted intersections.

Under the agreement with the Cuiú Cuiú condominium, local artisanal operators can process mineralization to a depth of 30m, unless otherwise negotiated. Shafts generally stop at or above the depth of the water-table.

Previous Post
Cabral cuts 3.4m @ 36.9 g/t gold in Machichie Drilling and Announces the Discovery of a New High-grade Zone at the Cuiú Cuiú Project, Brazil
Next Post
Cabral Reports New High-grade Drill Results at Seis Irmaos and Targets Historic High-grade Results at MG and Central
Menu
This website uses cookies to improve your experience. If you continue to use this site, you agree with it.
Ok