Vancouver, British Columbia–(Newsfile Corp. – April 29, 2019) – Cabral Gold Inc. (TSXV: CBR) (OTC Pink: CBGZF) (“Cabral” or the “Company”) is pleased to provide an update on the 2019 drilling program and a review of the historic drill data at its MG and Central deposits at the Cuiú Cuiú Project, Pará State, Brazil.

The Seis Irmaos target is located approximately 300m south of the MG deposit which is one of two main deposits currently known at Cuiú Cuiú (Figures 1 and 2). The MG deposit contains Inferred resources of 8.6MMt @ 1.45 g/t gold (0.4MMoz of gold). The Seis Irmaos target is the third of nine targets to be tested as part of the 2019 drill program, has never been previously drill tested and is characterised by a magnetic low and a number of high grade surface samples ranging from 17 to 55 g/t gold. A coincident gold-in-auger sample anomaly is also evident on surface.

A single hole (CC187-19) was completed on this target to a depth of 148m and intersected 0.7m @ 12.7 g/t gold in a quartz vein with strong pyritic alteration from 62.0-62.7m (Figure 2). This represents a new high-grade structure within close proximity to the MG deposit and will require follow up drilling.

There are a number of high-grade zones evident within the MG resource as discussed below. While the three 2019 holes did not encounter high-grade values, the oriented core provided important data suggesting high-grade, steep north-dipping mineralization may be partly controlled by crosscutting structures. Further work will be required in order to better constrain the continuity of such zones. 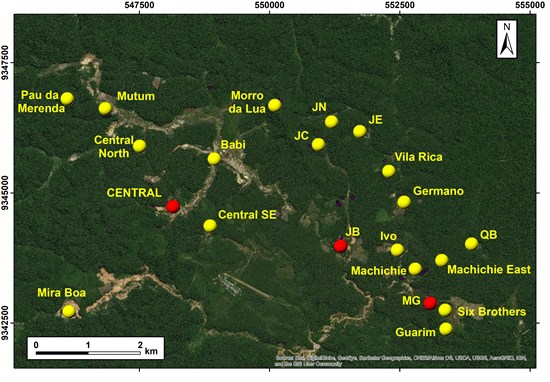 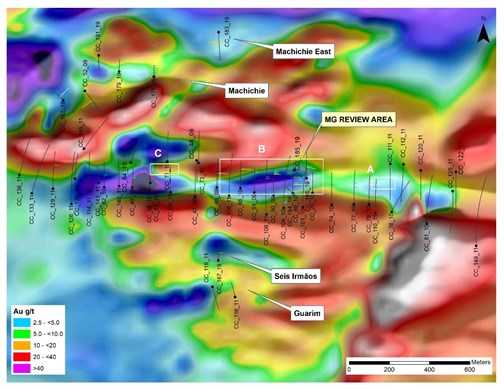 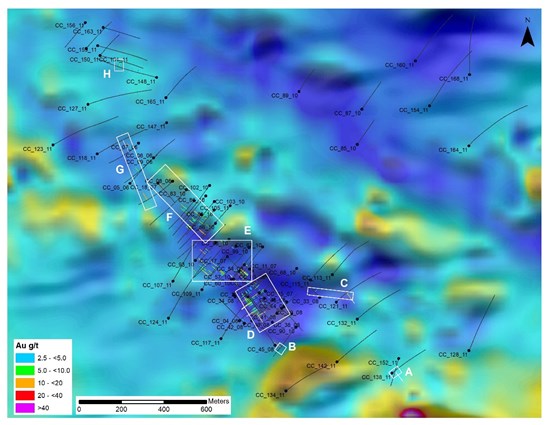 From 2006 to 2012, Magellan Minerals Ltd. (“Magellan”) evaluated the bulk-tonnage gold potential of the Cuiú Cuiú property, and successfully identified four deposits including Central, MG, Central North and JB (Figure 1). Cabral Gold is currently focused on discovering high-grade resources, based on the premise of that lower capital and higher grades could potentially lead to greater economic returns with shorter payback periods. There are already two operating high-grade underground gold mines in the region.

Existing bulk-tonnage resources at MG and Central were defined using wide-spaced, long drill holes, typically 50 to 100m apart, and predominately only one hole per section. Wireframes were designed to capture the bulk low-grade resources using a cut off of just 0.35 g/t gold.

Given Cabral Gold’s stated focus on evaluating the high-grade gold potential of the Cuiú Cuiú project, the Company has initiated a fulsome review of all available data to re-evaluate the high-grade potential of both MG and Central in order to design an appropriate drill program to delimit the high-grade mineralization and incorporate those results in future resource estimates and economic studies. Whilst this work is ongoing, the preliminary conclusions are presented below.

Cabral’s MG deposit (Figures 1, and 2) is located within an east-trending magnetic low. It has been traced by diamond drilling for 2.2km along strike, and from surface to a maximum depth of 360m. At least three focus points with subdued magnetic response are present, forming pod-like “cells” 500-600m along strike. Magnetic susceptibility readings on the core indicate that magnetic destruction is associated with alteration and gold mineralization.

No infill drilling was done to assess the high-grade potential of the deposit, although there were 18 samples higher than 10g/t Au, including 6 samples exceeding 1.0 oz/t, the highest being 0.5m @ 264.9 g/t gold (Table 2).

The MG resource is surrounded by a broad, low-grade, red-rock alteration halo, in places nearly 100m wide. It is characterized by weak to strong microcline (kspar) and/or hematite replacement of plagioclase, and by chlorite replacement of amphiboles and biotite within diorite. These red rocks show little to no deformation.

Within the broader red-rock alteration zone, are east-trending higher-grade narrower, vertical to steep north dipping, laterally and vertically continuous strong grey alteration zones. These are characterized by distinctly low magnetic rocks, with silicification, chloritization, sericitization and sulphidation, which overprint, to various degrees, the red-rock alteration. In many places the alteration is so intense it masks the original igneous and deformation textures.

Top cuts used in the Micon resource estimate were of 2 g/t gold for the surrounding low-grade red-rock alteration zone, and 10 to 20 g/t gold for the main grey zones, based largely on statistical analysis. This had a significant impact on resource grade and contained ounces. For example, the highest grade sample, 264.9 g/t gold was not included within one of the grey wireframe zones and was cut to 2g/t gold within a 2m composite.

The current drill density is insufficient to confidently interpret and correlate very high-grade results from hole to hole, or section to section, or to definitively determine any plunges or structural controls.

In the months following the completion of the Micon resource estimate in June 2018, diamond drill core was relogged, geophysical data was reprocessed, and geological studies have prompted a review of the previous interpretation. This program is ongoing, but to date has led to the following key observations: 1) highest grades are associated with quartz stringers, veining and flooding with abundant pyrite, 2) mineralization appears to dip slightly less than 80 degrees north, such that most of the high-grade samples lie along a tighter E-W trending central corridor when projected to surface, 3) highest grade mineralization is more common in structurally complex areas, and there is a suggestion of a conjugate set of cross structures (NW and NE) which might impact distribution of the higher grade east-trending mineralized zones. Recent drilling utilized oriented core further supports this hypothesis.

Additional drilling will be required to tighten spacing to potentially correlate higher grade intercepts, particularly where “ponding” and oblique structures are interpreted.

Cabral’s Central and Central North deposits (Figures 1 and 3) are located within a northwest-trending magnetic low corridor, that has been traced by diamond drilling for 2.3km along strike, and from surface to a maximum depth of 435m. The region is structurally complex with mineralization primarily controlled by northeast-trending broad structural corridors (over 200m wide), interpreted to have been modified by east-trending and southwest-trending rotational faults. Magnetic susceptibility readings on the core indicate that magnetic destruction is associated with alteration and gold mineralization; however, background magnetics in this region are much lower than MG, thus the signature is far more subtle.

Central was discovered, and drilled by Magellan Minerals Ltd from 2006 to 2011. 76 holes, totaling, 23,191m, were drilled in the Central/Central North corridor. Sections were very wide-spaced (in places over 200m, but more commonly 100m apart (50m in the core area) and most sections just had one hole. Focus at that time was on identifying low-grade potentially bulk-tonnage gold deposits.

As was the case at MG, very little infill drilling has been done to assess the high-grade potential of the Central-Central North corridor, although there were 34 samples higher than 10 g/t gold, and 12 samples exceeding 1 oz/t, the highest being 0.5m @ 100.9 g/t gold (Tables 2 and 3).

Alteration and deformation intensity at Central is much stronger than at MG but in general, the mineralized zones are surrounded by a broad, low-grade, red-rock and/or dark chloritic alteration halo that in places is several hundred metres wide. As at MG, the red-rock alteration is characterized by weak to strong microcline (kspar) and/or hematite replacement of plagioclase and by chlorite replacement of amphiboles and biotite within various intrusive rocks. Deformation within these plutonic rocks ranges from little to none, to highly brecciated and foliated.

Within the broader alteration zone, are a number of styles of alteration associated with higher-grade mineralization which formed the core of most of the current wireframe zones. However, those wireframes also included some of the low-grade mineralized alteration halo. Micon also incorporated a low-grade domain between and encompassing the higher-grade zones which included lower-grade alteration, fresh rock and minor undefined higher grade zones. A total of 11 mineralized zones were wireframed at Central, and four at Central North.

The highest gold grades are mainly associated with 1) quartz veining and flooding with abundant pyrite, 2) strongly chloritized, silicified, sulphidized breccias and mylonites, and 3) margins of mafic and felsic dykes.

Top cuts used in the Micon resource estimate were of 3g/t for the surrounding low-grade alteration zone, and 10 to 20 g/t for the main mineralized zones, based largely on statistical analysis. This had a significant impact on resource grade and contained ounces of gold. No top cuts were required at Central North.

The current drill density is again insufficient to confidently interpret the 34 very high-grade intercepts (Tables 2 and 3), and correlate those very high-grade results from hole to hole, or section to section, nor to definitively determine any plunges or structural controls. Of the 29 holes intersecting high grades, 13 had one or more other holes drilled up-dip or down-dip on the same section, some of which were nearly 400m down hole, or nearly 350m deep.

A total of eight areas contain very high-grade intervals that are labeled from A to H in Figure 3. High-grade intercepts for these holes are provided in Tables 2 and 3.

Additional drilling will be required to tighten spacing, and to potentially correlate higher-grade intercepts at Central.

Alan Carter, President & CEO stated: “We continue to be encouraged by the drill results from the reconnaissance drill program at Cuiú Cuiú and look forward to receiving the results on the remaining targets that were tested as part of the reconnaissance drill program, which commenced in January 2019. In addition, our detailed review of the historic drill data has revealed a number of discrete high-grade zones within the lower grade mineralized envelopes at both the Central and MG deposits which lend further support to the presence of numerous high grade zones at Cuiú Cuiú.” 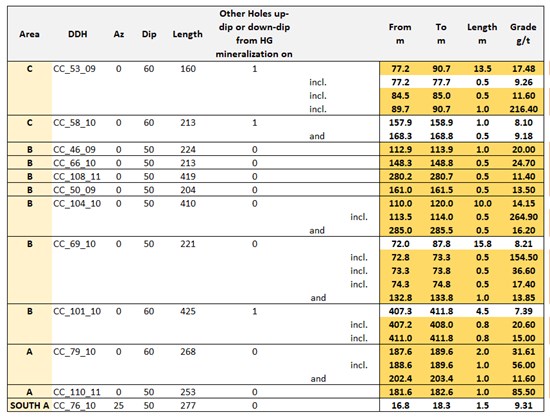 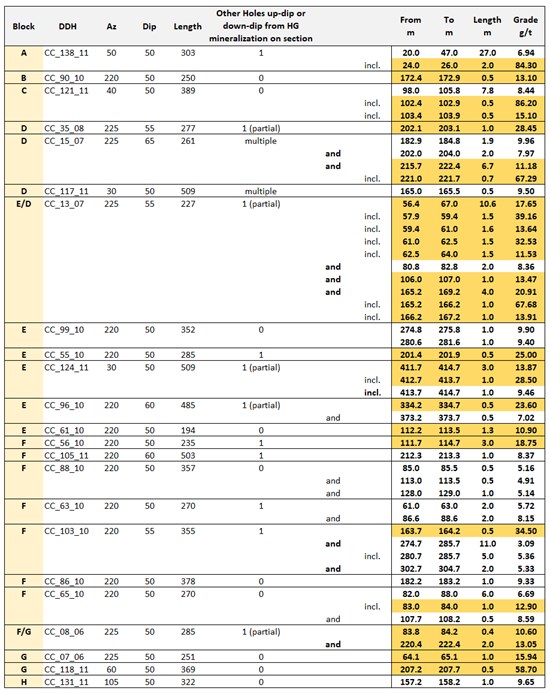 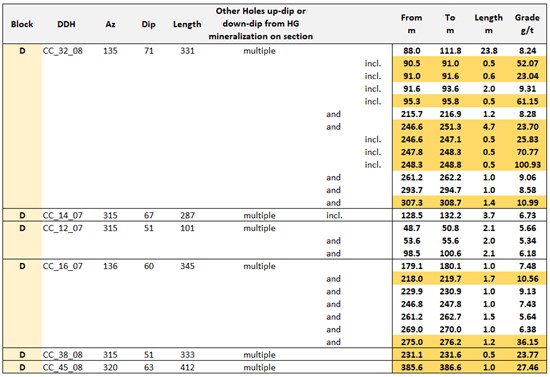 Table 3: High-grade historic Central drill intercepts (Northwest sections). All of these holes are in block D shown in Figure 3.

The Company also wishes to announce that, subject to regulatory approval, it has retained Market Making Services Inc. (“MMS”) to provide market making services in accordance with the policies and guidelines of the TSX Venture Exchange (“TSXV”). MMS will trade the securities of Cabral on the TSXV for the purpose of maintaining an orderly market and to provide liquidity of Cabral’s common shares. For these services Cabral will pay MMS $5,000 per month for a minimum three-month term, payable in advance, and renewable every month thereafter. Each party will have an option to cancel after the initial three-month term with 30 days advance notice. The Company and MMS act at arm’s length. MMS will not be paid any shares, options, or performance related guarantees by Cabral or any other related party. The capital used for market making will be provided by MMS.

Mr. James Connor is the principal of MMS and has worked in the financial industry for over 20 years. He has extensive experience as a liability trader having worked for such firms as CIBC, Credit Suisse, Merrill Lynch, and Cormark Securities and also as a coverage trader covering some of the largest institutional investors in North America. James started MMS with the primary purpose of providing capital market services to publicly traded companies.

The Tapajós Gold Province is the site of the largest gold rush in Brazil’s history. Cuiú Cuiú was the largest garimpo in the Tapajós and produced an estimate 2Moz of placer gold historically.