Vancouver, British Columbia–(Newsfile Corp. – July 23, 2020) – Cabral Gold Inc. (TSXV: CBR) (“Cabral” or the “Company”) is pleased to announce the results from a series of surface rock and soil samples at the Cilmar target area and provide an exploration update of the Cuiú Cuiú gold project in Brazil. Numerous coarse nuggets have been recovered from drainages in the Cilmar area, which is located 7km NE of the MG gold deposit, and has never been previously explored or drill tested.

Alan Carter, President & CEO stated “the identification of the potential source of coarse gold nuggets recently recovered from streams in the Cilmar area has not been straightforward due to the presence of thick post-mineral cover. However, recent sampling has resulted in a number of good gold values in surface rock samples, which has consequently narrowed the search down to the point where we now have drill targets at Cilmar. The eastern part of the project area is turning out to be very prolific in terms of new high-grade targets and continues to support our belief that Cuiú Cuiú is an emerging district which contains multiple gold deposits. We look forward to the commencement of RC drilling on this target and other recently identified high grade targets in the next few weeks.”

The Cilmar target at Cuiú Cuiú is located in the northeastern part of the concession area approximately 7km NE of the MG gold deposit and 10km ENE of the Central gold deposit and 8km N of the recently identified Alonso target where surface sampling returned gold values ranging from 11.6 – 200.3g/t gold (see news release dated April 1, 2020).

The target area has never been previously explored. Numerous coarse angular gold nuggets (Figure 1) were recovered in 2019 from a 200m interval within a N-S trending drainage. Efforts to locate the source of these nuggets have been hampered by thick overburden and post-mineral lake sediments up to 20m thick. 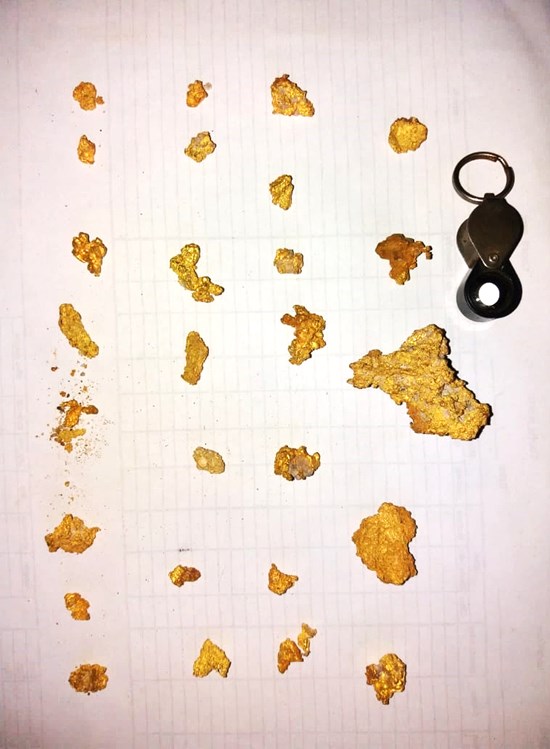 During the last few months Cabral has reprocessed the airborne magnetic data from this part of the Cuiú Cuiú concession area, and recently received results from reconnaissance soil sampling, shallow auger sampling and rock float sampling completed during Q1 2020. This work has revealed that the Cilmar nugget field is located at the intersection of two major regional structures, an ENE trending structure and a NW feature (Figures 2 and 3). The latter is parallel to the main TZ regional structural zone which controls all of the known deposits in the region.

Of even greater significance is the fact that quartz-sulphide boulders have been identified 350m WSW of the nugget field indicating the presence of an ENE trending mineralized structure that would explain the numerous gold nuggets in the stream. (Figure 3). A shallow auger hole completed 250m SW of the float samples intersected quartz veining and a value of 3.2 g/t gold from saprolitized bedrock. This is highly anomalous for an auger sample and further supports the presence of a concealed mineralized structure. Both the auger hole and the quartz-sulphide boulders occur within a coherent, low-level NE trending gold-in-soil anomaly extending over at least 1.8km. 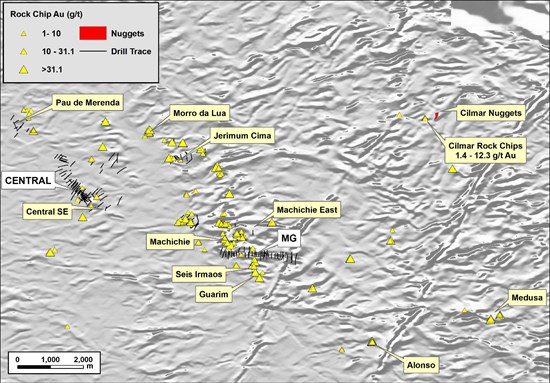 Figure 2: Regional 1VD magnetic map showing location of the Cilmar target relative to the existing deposits at MG and Central and recently identified high-grade undrilled targets at Alonso and Medusa, and targets with high-grade drill intercepts 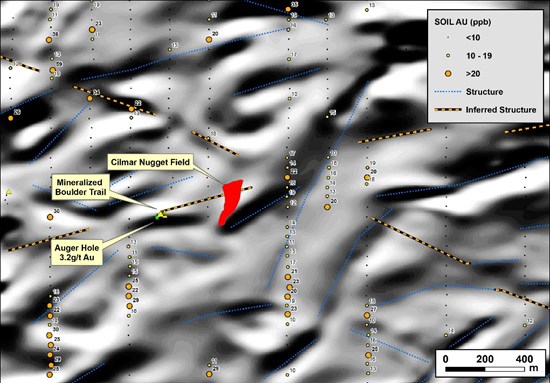 This initial reconnaissance work suggests the presence of at least one concealed mineralized structure trending ENE and is considered to be a compelling drill target, and the potential source of the coarse angular gold nuggets in the stream. The Company expects to test this target, along with the recently identified Alonso and Medusa targets from early August 2020.

The Company has recommenced field work at the Cuiú Cuiú project following the suspension of activities on April 1, 2020 due to the Covid-19 pandemic.

A number of protocols have been initiated concerning Covid-19, including the advance testing of all employees, and the Company continues to provide medical support and supplies (including masks and test-kits) to the community of Cuiú Cuiú.

Drilling using the recently acquired ASV ST-50 reverse circulation drill rig is expected to commence during early August and will initially focus on the recently identified high-grade Alonso and Medusa targets, then Cilmar, followed by other targets. The Company expects to provide additional details in advance of the commencement of the planned drill program.

Gold assays at the Cilmar target have been determined by SGS method FAA505 (fire assay; 50 charge). Analytical quality is monitored by certified references and blanks. Until dispatch, samples are stored in the company’s supervised exploration office. The samples are couriered to the assay laboratory using a commercial contractor. Pulps and rejects are returned to the Company and archived.

Previous Post
Cabral Gold Receives TSX Venture Exchange Approval for Warrant Extension
Next Post
Cabral Gold Mobilizes Drill Rig to Test High-Grade Targets at the Cuiú Cuiú Gold Project
Menu
This website uses cookies to improve your experience. If you continue to use this site, you agree with it.
Ok