Vancouver, British Columbia–(Newsfile Corp. – August 20, 2020) – Cabral Gold Inc. (TSXV: CBR) (OTC Pink: CBGZF) (“Cabral” or the “Company“) is pleased to announce the mobilization of an RC drill rig to the Cuiú Cuiú project in northern Brazil. Highlights are as follows;

The objective of the planned drill program is to outline multiple high-grade gold deposits at the Cuiú Cuiú project where previous drilling has already outlined a large low-grade resource with Indicated Resources of 5.9Mt @ 0.9 g/t (200,000oz) and Inferred resources of 19.5Mt @ 1.24 g/t (800,000oz) and comprises the MG and Central deposits. Drilling completed during 2019 clearly demonstrates the presence of high-grade zones within the MG and Central deposits, and also increased the number of peripheral targets with high-grade gold drill intercepts to eight, suggesting the presence of a major district containing multiple gold deposits.

Drilling will initially test several targets which have returned high-grade gold values on surface. These include the Alonso, Medusa and Cilmar targets (Figure 1) which have never been previously drill tested and returned spectacular gold values from surface values earlier this year, including gold values of 11.6 to 200.3 g/t gold from 24 surface boulders at Alonso, and 1.1 to 82.1 g/t gold from 19 surface boulders at Medusa (see press releases dated February 11, 2020 and April 22, 2020).

Following the completion of these initial drill programs, the rig will move to complete further drilling at the Machichie and Machichie East targets (Figure 1) which are located 600m and 800m respectively, north of the MG gold deposit, and where initial diamond drilling during 2019 returned encouraging results including 3.4m @ 36.9 g/t gold.

Infill drilling is also planned at the high-grade zones within the MG and Central deposits to further define the dimensions of the high-grade core zones which are surrounded by lower grade envelopes. Drilling during late 2019 returned 7.6m @ 18.5 g/t and 5.6m @ 13.0 g/t gold.

Drilling is expected to continue through into mid-2021 and the target sequence is likely to change as drill results become available. It is considered highly likely that ongoing reconnaissance work in the Cuiú Cuiú district will generate additional targets. Turn around times for analytical results are expected to be from 2-4 weeks. 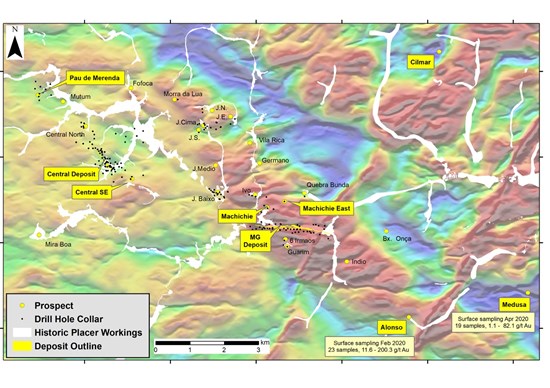 Figure 1: Location of placer workings and the Central and MG deposits and peripheral targets (in yellow) which are currently scheduled for drilling

Cabral’s Board of Directors has approved the granting of restricted share units (“RSUs”) to five officers and directors pursuant to the Company’s RSU plan. Subject to any necessary or required approval of the TSX Venture Exchange, the RSUs entitle the holders to acquire a total of 575,000 common shares in the capital stock of the Company. Fifty percent of the RSUs will vest 18 months after the date of grant with the remainder vesting after 36 months.

On August 10, 2020, the Company mailed a Notice of Annual General Meeting (the “Notice”) to its registered and (in accordance with the requirements on National Instrument 54-101) unregistered shareholders indicating that its 2020 Annual General Meeting (the “Meeting”) would be held at Suite #1200 – 750 West Pender Street, Vancouver, British Columbia, V6C 2T8 on September 9, 2020 at 10:00 a.m. (Vancouver time).

To ensure the safety of our shareholders and other stakeholders entitled to attend the Meeting amidst the ongoing COVID-19 pandemic, the Company has determined that in-person attendance will not be permitted at the Meeting and that there will be no physical location for the Meeting. The Meeting will be deemed to be held at the Company’s registered office located at Suite #1200 – 750 West Pender Street, Vancouver, British Columbia, V6C 2T8, but the Meeting will be held in virtual only format, which will be conducted via telephone conference. Registered shareholders and validly appointed proxyholders may attend the Meeting by calling the following toll free number in Canada and the United States: 1-800-669-6180, or by calling 1-604-484-1962. All callers will be prompted to enter the following passcode upon entering the teleconference: 585276.

Gold assays have been determined by SGS method FAA505 (fire assay; 50 charge). Analytical quality is monitored by certified references and blanks. Until dispatch, samples are stored in the company’s supervised exploration office. The samples are couriered to the assay laboratory using a commercial contractor. Pulps and rejects are returned to the Company and archived.

Previous Post
Cabral Gold Zeroes in on Source of Gold Nuggets at Cilmar Target and Provides Exploration Update at Cuiú Cuiú
Next Post
Cabral Unaware of Material Change
Menu
This website uses cookies to improve your experience. If you continue to use this site, you agree with it.
Ok