Alan Carter, Cabral’s President and CEO commented, “These latest results from the diamond drilling at the MG deposit suggest that the recently identified mineralized oxide blanket which has resulted from weathering and overlies the MG deposit, contains much higher-grade zones than we previously envisaged and over thicker intervals. This gold mineralization occurs at or close to surface in free-digging material, much of which was assumed to be sterile in the last resource estimate completed in 2018. I said a few weeks ago that the identification of this oxide blanket could be a game changer, and these results support this view. We expect that it could significantly add to the MG resource and we are now considering the possibility of identifying other oxide gold blankets elsewhere in the Cuiú Cuiú gold district.”

Assay results were returned on three additional diamond drill holes (DDH 212, 213 and 214) which were recently completed at MG as part of the current diamond drill program designed to define the limits to the high-grade zones within the existing MG and Central deposits at Cuiú Cuiú. All three holes were drilled on the same section which is located 50m east of the previous section where the recently reported diamond drill holes, 208, 209, 210 and 211 were drilled (see press releases dated April 15 and April 29, 2021).

Whilst further drilling of this flat-lying oxide blanket at MG is needed, drilling to date suggests that the blanket extends at least 200m north and south of the margins of the MG deposit and appears to cover an area of approximately 500m x 400m. It is also becoming clear that this oxide blanket clearly has higher grade zones within it. Most of this unconsolidated near surface material was previously assumed to be barren in the 2018 resource estimate, but it is obviously a significant mineralized gold zone in its own right.

Drill results are pending on additional diamond drill holes, drilled on section 50m further west, and aimed at testing the high-grade zones at MG and the extent of the gold-in-oxide blanket. The drill program is continuing. 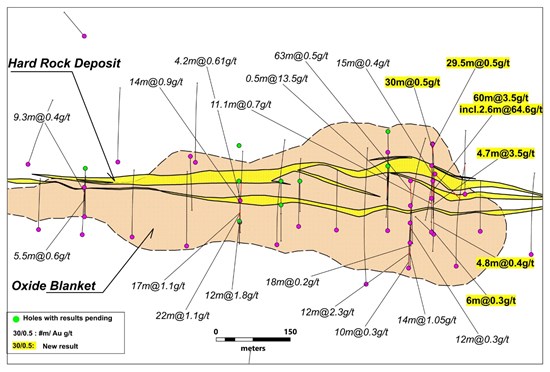 Figure 1: Map showing the outline of the MG gold deposit in yellow and the recently identified and overlying mineralized oxide blanket. Results from DDH 212, 213 and 214 are shown in yellow. Previous drill results from the overlying blanket are also shown 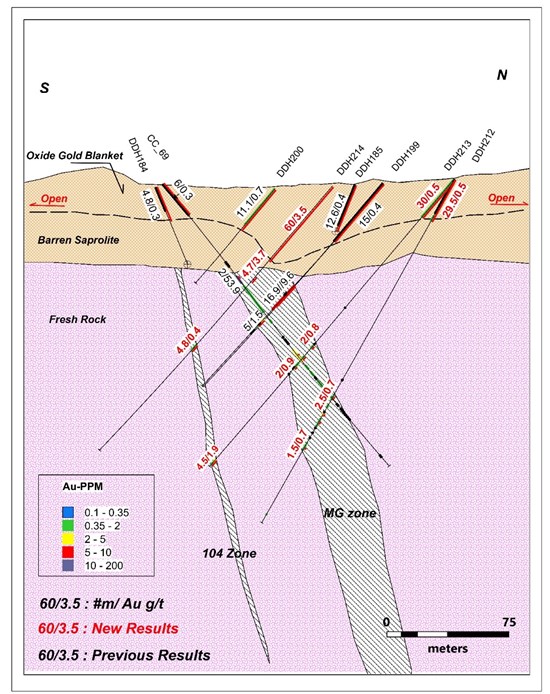 As a result of these highly encouraging results from the flat-lying oxide gold blanket which overlies the MG gold deposit, the larger Geosedna RC rig, which had been drilling at Machichie and Hamilton Novo, has been temporarily relocated to MG and tasked with drilling a series of shallow holes at MG to more accurately define the extent and grade of the oxide blanket.

Results were received on all of the RC holes recently completed at the JM target (Figure 3) and all returned gold values including 1m @ 2.6 g/t gold from 76m in RC-75 and 8m @ 0.5 g/t from 59m, 2m @ 1.0 g/t from 73m, and 3m @ 1.4 g/t gold from 81m in RC-76. These results are sufficiently encouraging, together with the surface results and the alteration noted in the drilling, that further follow-up diamond drilling is warranted. 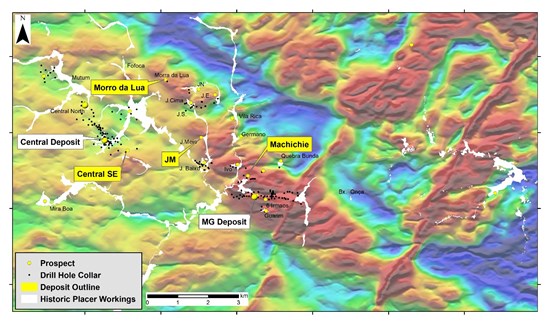 Guillermo Hughes, P. Geo. FAusIMM and AIG., a consultant to the Company as well as a Qualified Person as defined by National Instrument 43-101, supervised the preparation of the technical information in this news release.