Vancouver, British Columbia–(Newsfile Corp. – June 3, 2021) –  Cabral Gold Inc. (TSXV: CBR) (OTC PINK: CBGZF) (“Cabral” or the “Company“) is pleased to advise that following the recent identification of a gold-bearing oxide blanket above the MG deposit, Cabral has acquired all of the remaining surface rights which cover the oxide gold blanket and the underlying MG gold deposit. The MG gold deposit is one of two deposits with significant resources which have been identified to date within the Cuiú Cuiú gold district in northern Brazil.

Alan Carter, Cabral’s President and CEO commented, “The recent drill results from the gold-bearing oxide blanket at MG meant that the acquisition of the surface rights over this part of the Cuiú Cuiú district became an extremely high priority for us. Cabral now controls both the mineral rights and the surface rights to the MG gold deposit and gold-bearing blanket, as well as the recently identified Machichie zone located 500m north of MG. The acquisition of these surface rights, together with the recent granting of two Trial Mining Licenses over the MG deposit and the Machichie zone, enhances Cabral’s control of the area and raises the possibility of an accelerated path to production.”

Following the recent identification of a significant gold-bearing oxide blanket above the MG gold deposit, Cabral has acquired all of the surface rights, totaling 184.7 hectares (Figure 1), covering the eastern part of the MG deposit and the bulk of the overlying gold-bearing oxide blanket, where recent drilling returned 60m @ 3.5 g/t gold (see press release dated May 19, 2021).

As with most jurisdictions around the world, in Brazil surface rights are separate from mineral rights. Cabral already owns the two contiguous blocks of surface rights at Cuiú Cuiú (totaling 71.7 hectares) which cover the western half of the MG deposit and the parallel Machichie target (located 500m north of MG). It also covers most of the Machichie SW vein array where recent drilling at the Hamilton Novo vein returned 3m @ 13.2 g/t gold (see press release dated April 15, 2021).

This new acquisition brings the Company’s surface land holdings at both MG and Machichie to a total of 256.5 hectares.

As part of the transaction the Company also acquired a second area amounting to 186.9 hectares northeast of Machichie, and 1km east of the Quebra Bunda target where surface sampling of a high-grade vein in outcrop previously returned a value of 3,727 g/t gold (120 oz/t gold). The total consideration for both properties was R$474,000 (C$111,720) plus an additional nominal amount relating to compensation for structures and other improvements on the property which will be paid in Q3 2021. 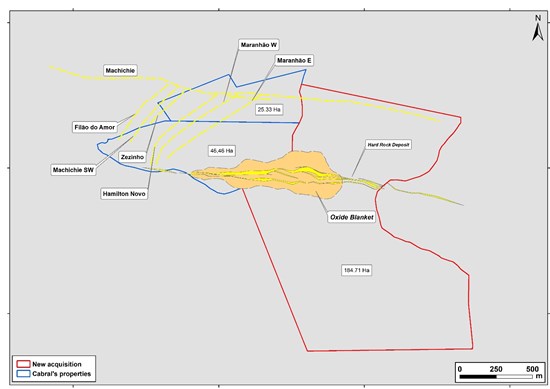 Surface access rights are distinct from mineral rights. The Cuiú Cuiú mineral rights held by the Company total 41,576 hectares including all ground comprising and surrounding the ‘New Acquisition’ and ‘Cabral’s properties’ referred to in Figure 1.

The Company is planning to aggressively determine the size of the gold-bearing oxide blanket at MG in the coming months, whilst continuing to both outline the high-grade zones in the underlying MG gold deposit, and drill test regional targets within the Cuiú Cuiú gold district.

Guillermo Hughes, P. Geo. FAusIMM and AIG., a consultant to the Company as well as a Qualified Person as defined by National Instrument 43-101, supervised the preparation of the technical information in this news release.

Previous Post
Cabral Gold Drills 60m at 3.5 g/t gold including 2.6m at 64.6 g/t gold in Oxide Blanket at the MG Gold Deposit, Cuiú Cuiú District, Brazil
Next Post
Cabral Gold inc. announces $10 million Bought deal public offering of Units
Menu
This website uses cookies to improve your experience. If you continue to use this site, you agree with it.
Ok