The Cuiú Cuiú Project is located in the Tapajós Province of northern Brazil, the site of the world’s largest gold rush and Brazil’s largest placer-gold belt, having produced an estimated 20-30Moz gold. Cuiú Cuiú was the largest historic placer camp in the Tapajos region, and has been cited by the government as having produced an estimated 2Moz of gold from streams and alluvial workings covering approximately 850ha, essentially bisecting the property. With the alluvial stream deposits largely exhausted, the few remaining artisanal workers are now targeting buried alluvial deposits and are also exploiting saprolite bedrock mineralization.

Previous work on the project was very successful in identifying sources for several of the alluvial workings establishing Indicated resources of 5.9MMt @ 0.9 g/t Au (for 0.2Moz) and Inferred resources of 19.5MMt @ 1.2 g/t Au (for 0.8Moz)1 in four deposits. However, the source of many of the alluvial production areas has yet to be determined, and the bedrock to various saprolite workings is yet to be explored.

The current program of surface exploration is aimed at following up unexplained alluvial, geochemical anomalies and saprolite mining areas to identify new drill targets. Many of the new targets are returning high grades in initial sampling. Figure 1: The central part of the Cuiú Cuiú property showing the deposits included in the current resource (red) and the primary target zones (yellow)

Morro da Lua is a newly identified target (see press release dated 21st March 2018). It has never been drilled and no results have ever been reported previously. Results from seven composite rock samples collected material adjacent to seven separate shafts. These returned values ranging from 5.5 to 162.4 g/t Au (Figure 2).

Ten active artisanal shafts are currently in production or in exploration at Morro da Lua with many other abandoned shafts scattered over an area which extends for approximately 220m E-W and 210m N-S (Figure 3). Individual veins appear to trend E-W and detected beneath thick soil cover 8-12m in thickness. Channel samples taken across two individual veins, each approximately 1m in width, returned grades of 0.3m @ 10.8 g/t Au and 0.3m @ 16.3 g/t Au. An objective for ongoing exploration will be to test for any halo of lower grade stockwork mineralization, and determine the overall width and strike extent of the zone which is currently unknown.

Results from 219 infill soil samples recently collected by Cabral at Morro da Lua indicate that a gold-in-soil anomaly extends 1.5km to the east of the current workings. Additional work at Morro da Lua will include deeper auger drill samples through the soil cover to test for indications of gold mineralization in the weathered bedrock along strike. 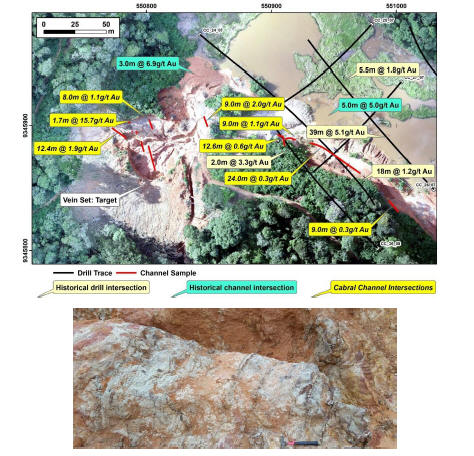 To view an enhanced version of this graphic, please visit:
https://orders.newsfilecorp.com/files/3900/35340_fig4enhanced.jpg

Exploration in and around the JC target has identified two other new mineralized zones Jerimum North (“JN”) and Jerimum East (“JE”), both of which were previously unknown (Figure 5). Rock chip grab sampling of mineralized rock adjacent to an abandoned shaft at JN, which is located 500m north of JC, returned values of 52.1 g/t, 13.0 g/t, and 10.0 g/t Au. Reconnaissance auger drilling has recently been conducted, returning traces of gold in pan concentrates from the colluvial horizon at the base of the soil profile which is on average 6m thick. Programs will continue with laboratory analysis of interface samples across the colluvial-saprolite zones, and reprocessing and extension of ground magnetics grids to trace the extent of the structures.

JE is similarly a new target located approximately 800m ENE of the JC target. A grab sample taken from quartz vein material immediately adjacent to a abandoned workings returned 152.6 g/t Au. Similarly, deep auger sampling of soils and evaluation of ground magnetic data are in progress to determine the size of this target. The extent of the mineralization at both JN or JE is currently unknown. Neither target has previously received any surface sampling or drilling. The Company expects to report additional surface sample assay results over the coming weeks and months from several areas listed below which will be used to identify and prioritize drill targets during the third quarter of 2018.

Gold analysis was conducted by SGS method FAA505 (fire assay of 50g charge), with higher grade samples checked by FAA525. The Morro da Lua grab samples were analysed by screen fire assay. Analytical quality is monitored by certified references and blanks. Until dispatch, samples are stored under the supervision the Company’s exploration office. The samples are couriered to the assay laboratory using a commercial contractor. Pulps are returned to the Company and archived. Channel sampling is conducted using a hand-trenching tool over exposed faces to maintain a consistent sample. Under the agreement with the Cuiú Cuiú condominium, local artisanal operators can process mineralization to a depth of 30m, unless otherwise negotiated. Shafts generally stop at or above the water-table. Historical drilling results are reports as down-hole length weighted intersections unless otherwise stated. The reported channel samples results are taken at right-angles to the strike of the structure and represent true-widths. Reconnaissance auger drilling is conducted as an initial test with the basal colluvial and upper saprolite samples separately panned for visual checks of gold. A second phase of grid-based auger drilling will be conducted to verify anomalies with split samples from the saprolite interval and geochemical tests of the soil and coarse fractions in the colluvium directly above the interface.

Dr.Adrian McArthur, B.Sc. Hons, PhD. FAusIMM., a consultant to the Company as well as a Qualified Person as defined by National Instrument 43-101, supervised the preparation of the technical information in this news release.

Previous Post
Cabral Reports an Updated Resource Estimate at its Cuiú Cuiú Project in Brazil
Next Post
Cabral Gold Announces Auger Drilling Results from Cuiú Cuiú suggesting Central Mineralized Corridor may extend over 4km
Menu
This website uses cookies to improve your experience. If you continue to use this site, you agree with it.
Ok