Vancouver, British Columbia–(Newsfile Corp. – December 3, 2020) – Cabral Gold Inc. (TSXV: CBR) (OTC Pink: CBGZF) (“Cabral” or the “Company”) is pleased to announce the identification of a new high-grade target north of Medusa, and an update on the initial RC drilling at the high-grade Alonso and Medusa targets at the Cuiú Cuiú gold district in northern Brazil. Highlights are as follows;

Tracaja target – Ongoing regional reconnaissance work within the Cuiú Cuiú district has identified a new high-grade gold target at Tracaja, which is located 1.8km NNE of the Medusa target. Nineteen surface grab samples collected from the edge of historic placer workings, returned gold values of 24.2 g/t to 165.0 g/t gold and average 74.9 g/t gold
Alonso target Drilling update – Results have been received on a further twelve reconnaissance RC holes at the initial Alonso target. None of the holes encountered any significant gold mineralization. Several additional holes will test alternative trending structural targets and the possibility that the high-grade surface boulders may have been transported further than anticipated
Medusa target Drilling update – Initial drilling at the Medusa target is in progress. Twenty holes have been drilled to date and assay results are pending
Machichie / Machichie SW Drilling – A second rig recently arrived and is initially targeting extensions of 2019 high-grade drill results at the Machichie target. Recent surface sampling from the Filao de Amor vein structure in the Machichie SW area returned gold values of 0.5 – 324.5 g/t, with an average of 123.4 g/t gold
Alan Carter, Cabral’s President and CEO, commented, “The eastern part of the Cuiú Cuiú district is proving to be just as prolific as the central part where we already have two gold deposits drilled off and multiple high-grade targets. Tracaja has some exceptionally high-grade blocks on surface, but in this particular case, we have strong evidence that the surface blocks are derived from two NE trending veins which are currently submerged under water in an adjacent pit.

“Whilst the initial drilling at the Alonso target area has not thus far identified the source of the high-grade surface boulders, further drilling is planned to test other possible structural targets”.

Ongoing regional reconnaissance work in the eastern part of the Cuiú Cuiú concession area has identified yet another new high-grade target at Tracaja (see Figure 1) which is located 1.8km NNE of the Medusa target. Nineteen grab samples were taken from a number of blocks of sulphide-rich quartz vein material located over an area 150m in diameter and immediately adjacent to a flooded area of historic placer workings. The samples returned consistently high gold values ranging from 24.2 g/t to 165.0 g/t gold and averaging 74.9 g/t gold (see Table 1 and Figure 2).

Note; sample 30171 was an analytical standard 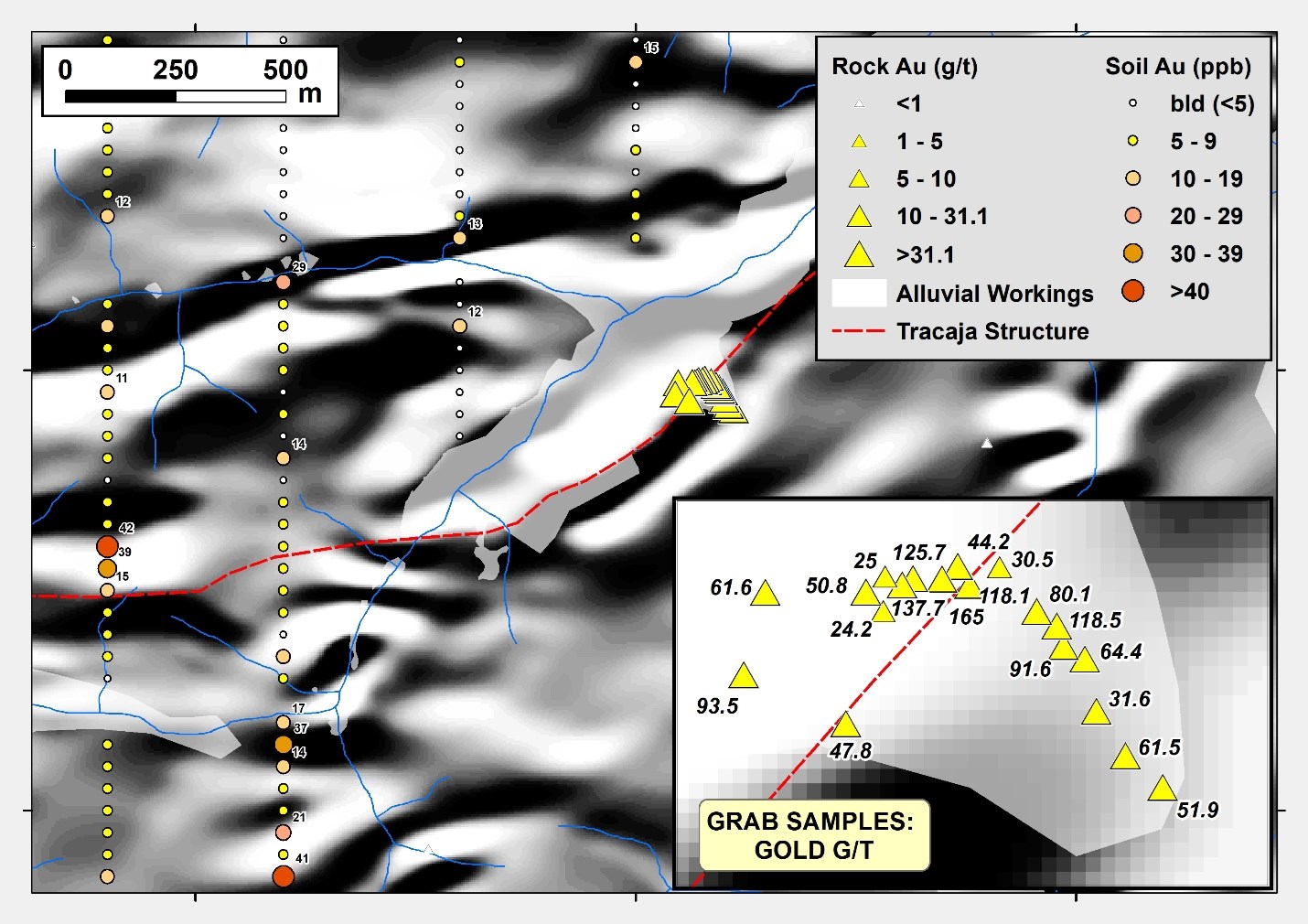 Anecdotal remarks by individuals who previously mined placer gold from this area suggest that the quartz-sulphide vein material was excavated from two NE trending quartz-pyrite veins that were exposed at the base of the stream bed during the placer mining and are now submerged under an adjacent flooded pit.

Given the very high-grades of these samples and this anecdotal evidence suggesting that they are derived from NE trending veins that were exposed beneath the original placer workings, the Company’s reconnaissance RC rig will test the Tracaja target next once the initial RC drilling at Medusa is completed.

The current drill program at Cuiú Cuiú is designed to test at least ten targets over the next six months. The Company now has two RC rigs at its disposal; the Company-owned track mounted ASV ST-50 mobile rig which can drill to a maximum depth of 200m, and a larger truck mounted contract RC rig capable of drilling to depths of 450m.

The drill program has two distinct components which are as follows;

Reconnaissance drilling: This is a grass-roots program designed to test regional targets that are not well defined. The drill programs for these targets are planned as drill hole traverse across surface geochemical anomalies or boulder occurrences to identify potential mineralized structures or trends. This utilizes Cabral’s own track mounted ASV ST-50 mobile rig. All of the recent drilling completed to date at Alonso (target #1) and Medusa (target #2) has been part of this component; the program at Tracaja (target #3) will also be part of this component
Follow-up drilling of Advanced targets: This program is designed to follow up positive results from previous drill holes and surface trenches where the locations of the mineralized structures are known. It will utilize a larger truck-mounted contract RC rig capable of drilling to depths of 450m. This rig will initially follow up on positive drill results at the Machichie target, including 45m @ 1.0 g/t (incl. 3.1m @ 7.3 g/t gold), 62.8m @ 0.9 g/t (incl. 2.1m @ 15.3 g/t gold), and will then move to further test at least four of the recently identified high-grade veins in the Machichie SW area where previous drilling intersected 3.4m @ 36.9 g/t gold, and 3m @ 7.4 g/t gold
Reconnaissance Drill Program

In the current drill program, reconnaissance drilling has been testing high-grade surface boulder occurrences at Alonso and Medusa. Both have been traversed with fences of shallow RC holes to identify structural controls and potential basement mineralization.

The Alonso target is the first of at least ten targets to be drilled during the current drill campaign. Alonso had never been previously drilled and numerous angular quartz vein boulders with gold values ranging from 11.6 to 200.3 g/t gold were found on surface.

There is virtually no surface exposure at Alonso, and the source of the boulders is currently unknown. Several north-south oriented traverses of shallow reconnaissance holes were drilled across what was believed to be an E-W trending structure, based largely on the interpretation of an E-W trending magnetic anomaly.

Results were received on all samples from the remaining 12 reconnaissance RC holes at Alonso from the initial traverses. None of the holes intersected significant gold mineralization. This does not mean the boulders were not locally derived. But the question of where the high-grade boulders have been eroded from has still not been answered. Alternative structural controls will now be tested.

Twenty reconnaissance traverse holes in three fences have so far been completed at the Medusa target. This is the second target of the current program, and is located 4km east of Alonso. Results are pending on all twenty holes and the Company is currently planning to drill an additional two holes before moving to the Tracaja target (see above).

Drilling is now in progress at the first follow-up drill target of the larger truck mounted RC rig described earlier. The main Machichie target is an E-W trending mineralized system that was drilled for the first time in 2019 and returned gold values including 45.0m @ 1.0 g/t including 3.1m @ 7.3 g/t gold and 62.8m @ 0.9 g/t including 2.1m @ 15.3 g/t gold (Figure 3). Initial indications are that mineralization is continuous down dip and along strike for several hundred meters. The current drill program is aimed at systematically determining the limits to the mineralized system. 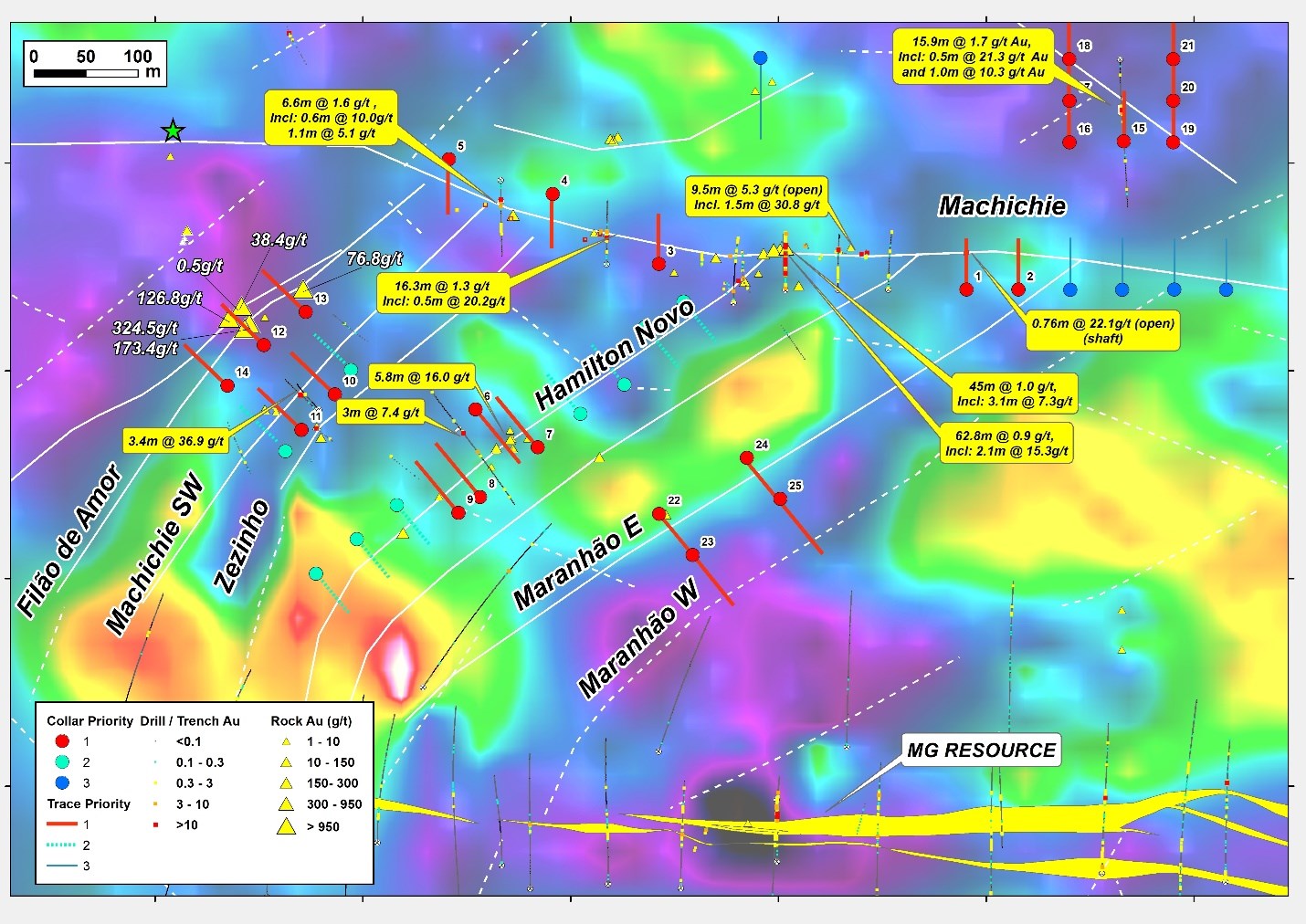 Following the completion of a series of infill and step out holes at the main Machichie zone, the rig will move to the Machichie SW area and will test at least four of the six NE trending vein structures, where gold mineralization either occurs in veins exposed in outcrop or veins that have been intersected in limited previous drilling. For example, previous drilling at the Hamilton Novo vein structure returned 3m @ 7.4 g/t gold while drilling at the Machichie SW vein structure returned 3.4m @ 36.6 g/t gold (Figure 3).

The Company is a junior resource company engaged in the identification, exploration and development of mineral properties, with a primary focus on gold properties located in Brazil. The Company has a 100% interest in the Cuiú Cuiú gold district located in the Tapajós Region, within the state of Pará in northern Brazil.

To view the source version of this press release, please visit https://www.newsfilecorp.com/release/69386

Previous Post
Cabral Gold Raises $4.5 Million Through Exercise of Warrants
Menu
This website uses cookies to improve your experience. If you continue to use this site, you agree with it.
Ok