Alan Carter, Cabral’s President and CEO commented, “The identification of another new high-grade gold target at Dona Moca and a significant gold-in-soil anomaly at Medusa are both positive developments that continue to highlight the potential for discovering additional gold deposits in the eastern part of the Cuiú Cuiú concession area. The current drill program will test at least 10 different targets at Cuiú Cuiú and will take several months to complete. Whilst the first three RC holes at the initial Alonso target did not intercept high-grade mineralization at depth, results are pending on 12 additional drill holes, and we remain committed to identifying the source of the high-grade boulders on surface”. 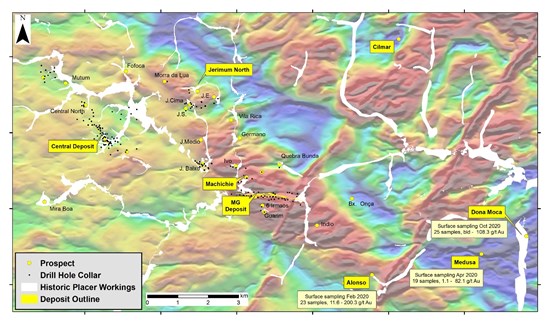 Figure 1: Regional RTP 1VD magnetic composite map showing location of the Dona Moca target relative to the existing deposits at MG and Central, and the Medusa and Alonso targets, as well as recently identified high-grade targets at Machichie SW and Jerimum North.

Surface grab samples collected over an area of 65m in length at Dona Moca showed abundant visible gold (Figure 2) and returned peak gold values of 108.3 g/t, 32.0 g/t, 21.9 g/t and 3.9g/t gold. The source of these grab samples is currently unknown and further soil sampling and surface trenching is planned. It is significant that the samples were collected at the northern end of a major placer working which extends at least 2km upstream to the south. A range of vein cobble types are seen in the drainage suggesting a multi-phase hydrothermal event, with the grey quartz returning the highest grades. 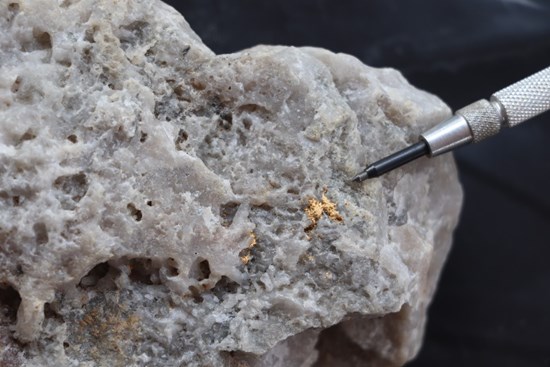 Results have been received on 1,080 soil samples completed as part of a grid surrounding high-grade boulders at the Medusa target and have identified a coherent gold-in-soil anomaly which extends for at least 1.4km in an ESE direction (See Figure 3). This may indicate the presence of a large concealed mineralized system at Medusa.

Drilling at Medusa is expected to commence in the next few days. 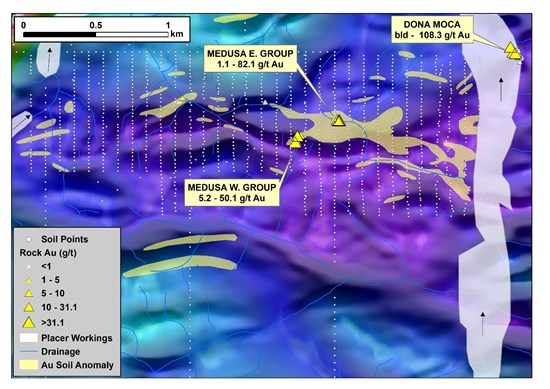 Whilst high-grade surface samples have been collected from other targets at Cuiú Cuiú, including the new Dona Moca target described above, the number of samples and the grade of the samples collected at Alonso were unusually high. As a result, the Company elected to drill this target first, even though there were no previous drill holes and an almost complete lack of surface exposure, and considerable challenges regarding access to certain areas of this target.

The initial round of RC drilling at Alonso is now almost complete with 15 holes completed to date. Results have been received on the initial three holes (RC1-20 to RC3-20) and have not identified any significant high-grade gold mineralization. RC1-20 was targeted to drill underneath the area of high-grade boulders but was lost before intercepting the projected down-dip extension of the mineralized zone. RC2-20 and RC3-20 were both drilled as part of a fence 150m east of the high-grade boulders (Figure 4).

Access to the area where high-grade surface boulders have been identified, is challenging, and despite the presence of waterlogged ground due to the proximity to a drainage, the Company was able to drill two additional holes (RC6-20 and RC7-20) which were drilled on the same section as RC1-20. Two additional holes RC4-20 and RC5-20 were completed on the fence 150m to the east. Results on these holes are pending.

Another fence of six holes (RC8-20 to RC13-20) was also completed 950m to the west of the high-grade boulders (western extension) where surface boulders are also mineralized and range from 1.0 to 7.7 g/t gold (Figure 4). Results on these holes are also pending.

Two holes (RC14-20 and RC15-20) have been drilled 75m east of holes RC1-20, RC6-20 and RC7-20, and have been designed to test the northern part of the structural corridor where the high-grade boulders were identified on surface.

The Company remains committed to identifying the source of the extensive alluvial gold in the drainage system at Alonso extending beyond the high-grade boulder occurrences, with the magnetics indicating a significant array of structures and intersections points extending from these initial lines. 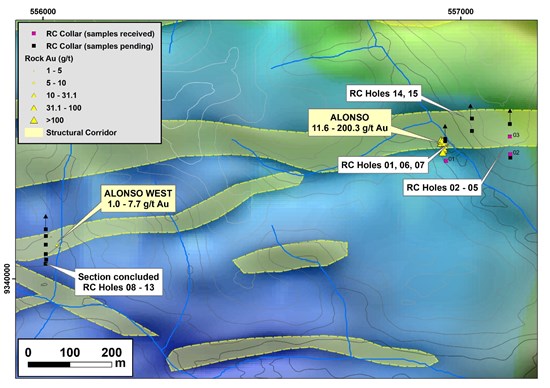 The second drill rig will mobilize to Cuiú Cuiú this week. It is a truck mounted RC machine and has the capability of drilling holes to 450m depth. The rig will initially target several of the recently discovered veins in the Machichie SW and Machichie area which are outcropping on surface (see press release dated 24th September 2020).

Gold assays have been determined by SGS method FAA505 (fire assay; 50 charge). Analytical quality is monitored by certified references and blanks. Until dispatch, samples are stored in the Company’s supervised exploration office. The samples are couriered to the assay laboratory using a commercial contractor. Pulps and rejects are returned to the Company and archived. The Medusa gold in soil anomaly is defined by > 90th percentile gold in soil assay result (>15ppb gold to a peak value is 382 ppb Au).

Previous Post
Cabral Gold Reports Channel Sample Results of 5.3m @ 24.0 g/t gold at Jerimum North Target, Cuiú Cuiú Gold District
Next Post
Cabral Gold Announces the Appointment of Carlos Vilhena to Board of Directors
Menu
This website uses cookies to improve your experience. If you continue to use this site, you agree with it.
Ok