Alan Carter, Cabral’s President and CEO commented, “The initial results from the previously untested Indio target are highly encouraging and suggest the presence of another high-grade mineralized structure at Cuiú Cuiú with continuity of high-grade. Further drilling will be required at Indio. At Machichie, additional follow-up drilling continues to expand the mineralized zone to the east and west and confirms the presence of a mineralized system that is very similar to the MG gold deposit located 500m to the south. We look forward to the results of recent and ongoing drilling at the high-grade portions of the MG deposit as well as the JM, JN, Hamilton Novo and Maranhao West targets”. 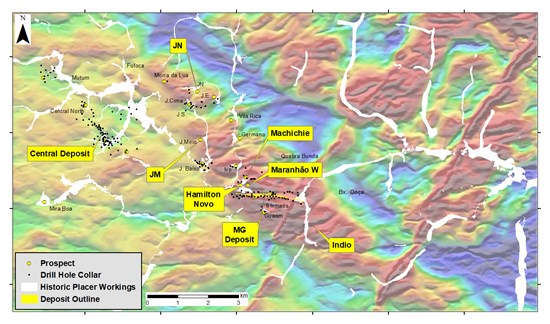 Reconnaissance drilling using Cabral’s ASV ST-50 RC rig recommenced on 18th February 2021 on the previously untested Indio target (Figure 1). The rig has subsequently moved to test targets at JM and JN where mineralized veins are exposed at surface. At this stage, the company is completing several initial holes at each target and, if warranted, will return to each of the targets at a later date once the assay data is interpreted and compiled.

Six holes (RC54, RC55 and RC70 – RC73) were completed at the previously undrilled Indio target (Figure 2), which is located approximately 1.5km SE of the MG gold deposit. Whilst there is no outcropping vein on surface at Indio, grab samples of mineralized quartz vein float returned gold values ranging from 1.5 to 137.8 g/t gold.

The holes were drilled in two areas 150m apart (Figure 2). Unfortunately, none of the six RC holes at Indio reached the projected down-dip extension of the main mineralized target due to excessive water during the rainy season, which limited RC drill penetration depths. Nevertheless, several of the holes did encounter unexpected mineralized zones. Further drilling of this zone and the main target will be conducted during the dry season which commences in April. 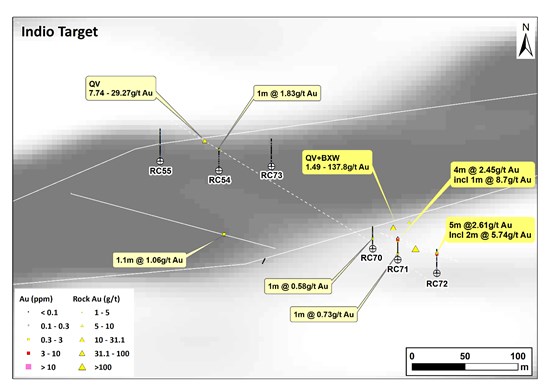 Six holes (RC74-RC79) have been completed at JM and assay results are pending.

The reconnaissance RC rig has moved again and is currently drilling the previously untested JN target which is located 4km NW of the MG gold deposit (Figure 1) and upslope of reportedly the richest stream mined for placer gold on the property. Surface sampling and mapping at JN during late 2020 identified an outcropping vein trending NE. A channel sample taken at 90 degrees to the vein axis returned 5.3m @ 24.0 g/t gold.

Follow-up drilling is being undertaken with a larger contracted Prospector W750 RC drill rig at the main Machichie mineralized zone, as well as a number of new targets in the Machichie SW area.

The four new holes were drilled over approximately 200m strike length with the first step out hole (RC47) returning 8m @ 1.3 g/t gold from 43m depth including 2m @ 4.0 g/t gold. The next hole (RC48) returned only weak mineralization with a maximum of 2m @ 0.5 g/t gold from 51m and hole RC49 drilled further to the east returned 2m @ 1.8 g/t gold (Figure 3). The final and most easterly hole (RC56) failed to intersect any mineralization of interest. 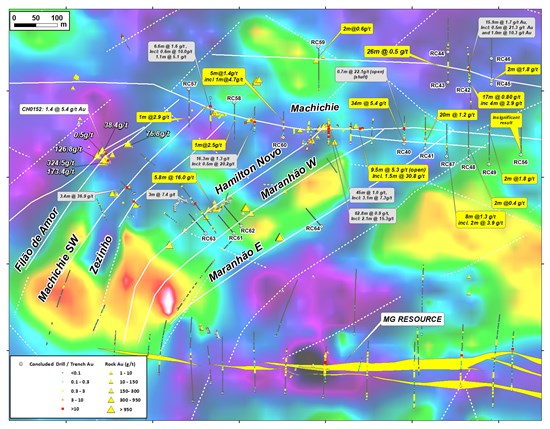 The drill results returned from the mineralized zone at Machichie zone suggest the presence of high-grade zones, or shoots, interspersed with zones of lower grade, which are very similar to the nearby MG deposit located 500m to the south. The higher-grade zones may be controlled by intersecting NE-trending structures and will require further drilling.

Results were returned on the final RC hole (RC46) at Machichie NE, which was drilled approximately 60m immediately north of RC-45 which intersected 28m @ 1.0 g/t gold from surface including 8m @ 3.3 g/t gold from 10m depth. RC46 was designed to test for parallel structures immediately to the north and failed to intersect any mineralization of interest.

The recent RC drill results from Machichie NE suggest the presence of another mineralized structure which is sub-parallel to the main Machichie structure. The mineralized zone remains open to both the east and the west and will require additional drilling to fully evaluate the extent of this new zone.

Infill diamond drilling program is in progress at the MG gold deposit and is targeting extensions of existing high-grade zones. Assay results are pending on six holes drilled to date.

Gold assays have been determined by SGS method FAA505 (fire assay; 50 charge). Analytical quality is monitored by certified references and blanks. Until dispatch, samples are stored in the Company’s supervised exploration office. The samples are couriered to the assay laboratory using a commercial contractor. Pulps and rejects are returned to the Company and archived. The Indio Program has been conducted with Cabral’s ASV Scout ST-50, reverse-circulation drill rig equipped with two compressors and a booster. Samples were collected in 1 m intervals, and split through a Jones Riffle Splitter or cone and quartered if humid. The Machichie program executed by GEOSEDNA – Perfurações Especiais S/A. using a Foremost Prospector W750 reverse-circulation drill rig equipped with a compressor and booster, with samples split using a Metzke Riffle Splitter. Sampling through alteration zones is conducted in 1m intervals.

Previous Post
Cabral Gold Recognized as a TSX Venture Top 50 Company
Next Post
Cabral Gold Appoints Experienced Mining Engineer and Executive to Board of Directors
Menu
This website uses cookies to improve your experience. If you continue to use this site, you agree with it.
Ok