The discovery of bedrock gold at Vila Rica was initially announced on March 21, 2018 (43.3g/t Au over 0.5m). This new undrilled target area was identified by Cabral’s ongoing reconnaissance evaluation of the district’s artisanal workings and prospective geophysical structures. Alluvial gold was historically exploited along the Vila Rica drainage system over a distance of ~1.5 km (Figures 1, 2 and 3), but no bedrock gold sources had previously been identified. With the placer mineralization in modern drainages becoming depleted, artisanal workers have begun to exploit buried paleo-placer deposits. Recently, while mining placer gold under a cover sequence, artisanal workers uncovered gold-bearing vein and stockwork-style mineralization within saprolite (highly weathered bedrock) in the Vila Rica area.

Further studies identified this cover sequence as young, unconsolidated, lake clays and channel sands and gravels that unconformably overlie primary gold mineralization within the older granite saprolite. This is schematically shown on Figure 4. The cover effectively buries the mineralization and renders conventional soil geochemistry ineffective. The recognition of this widespread cover sequence opens the door for detection of additional buried vein and stockwork style systems in areas that had previously been downgraded due to the lack of a surface soil anomaly. 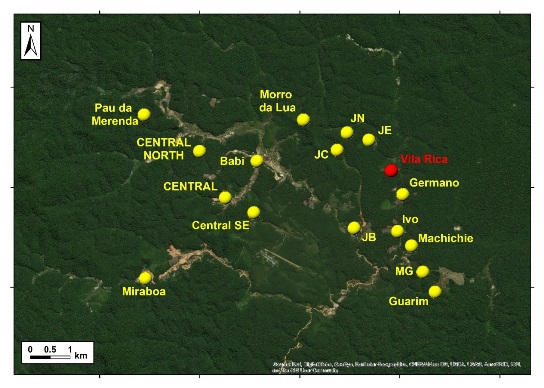 The artisanal workers continue to expand pits and other workings, and are uncovering previously concealed veins and stockwork zones in the process. Cabral’s ongoing program continues to evaluate these new areas, and sampling has returned solid gold values from mineralization in saprolite.

Mineralization at Vila Rica has been exposed in a pit ~90m to the east of the first sampling site. Rock chip samples in this new pit have returned grades of 8.1 g/t and 16.8 g/t Au. Recently reprocessed magnetic data shows a corridor of demagnetization trending eastwards from these two northern pits, suggesting an E-W structural control (Figure 2). This structural orientation is similar to that which controls the Moreira Gomes deposit, with an Inferred Resource of 8.6MMt @ 1.45 g/t Au, as well as the Morro da Lua, Jerimum Cima and JN targets.

Additional mineralization has been identified in a third pit ~250m to the southeast. Rock chip sampling of a quartz vein within a sericitic envelope returned 6.1 g/t Au, with a number of additional lower grade samples present (Figure 2).

Additional channel sampling has been undertaken where the saprolite is exposed (Figure 3). Channel positions are limited to the extent of the advancing faces, and available exposures on the floor, which are partly covered by rejects and slurry. As a result, continuous sampling coverage over the floor is not always feasible in active workings. Observations include:

Pit 1: An area of stockwork style mineralization returned 1.1g/t Au over 10 m, ~30m SE of the initial vein position. The area between the higher grade vein trend (43.3g/t Au over 0.5m), and this new position is currently covered, and will be sampled by trenching in the future when artisanal mining activity wanes. 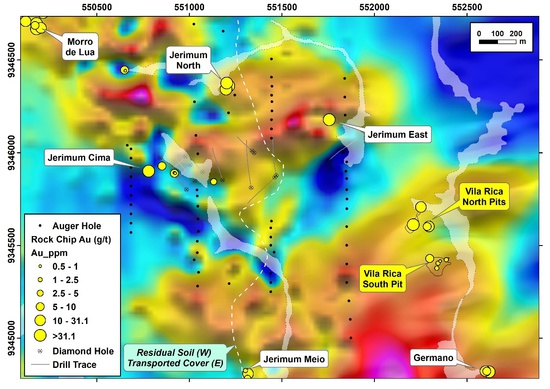 Figure 2: Location of the Vila Rica Area (east), in relation to surrounding prospects. Auger hole locations are marked (assays pending), along with past diamond drilling at Jerimum Cima. The recently reprocessed reduced-to-pole magnetics show areas of reduced magnetic amplitude in blue-green. These areas are being tested beneath the deep soil and alluvial cover, to test for a geochemical signature consistent with alteration and demagnetization. Rock chip assay results from Vila Rica and the surrounding prospects are shown. Alluvial workings in modern drainage are illustrated in transparency.

Pit 2: A single channel sample in the pit to the east has returned an interval of 0.88 g/t Au over 7.4 m (open). The pit is small and does not reveal the full strike equivalent exposure to the mineralization seen in Pit 1.

Pit 3. The SE pit is not situated on an obvious magnetic gradient but includes areas of low-grade mineralization in a grade range of 0.14 to 0.65 g/t Au. Channel sampling here included a result of 7.9 g/t Au over 1.9m, adjacent to the southern boundary of the pit. The alteration envelope remains open at the limit of exposure.

Cabral has commenced an auger drilling program to test for base-of-cover / top-of-saprolite gold anomalism, with past surface soil geochemistry now thought to be ineffective over large areas due to the extent of transported cover. The paleo-valley (geologically ancient, buried river valleys which no longer function as active surface water systems) placer deposits extend over a significant distance, having been traced ~1km to the west of the modern Vila Rica drainage position. The cover sequence over Vila Rica averages 12m deep, and in places has been observed to extend up to 31.5m below surface. 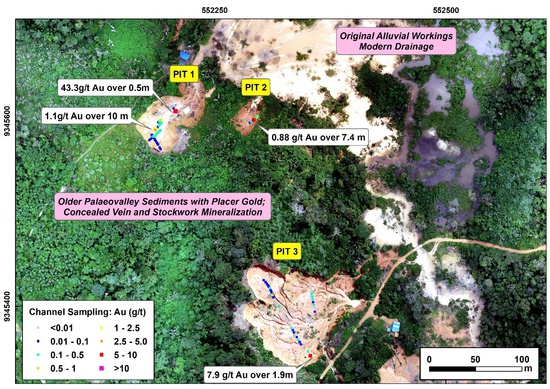 Figure 3: Detail of the Vila Rica area, showing channel sample locations in accessible points on the floor of artisanal pits, targeting the placer mineralization to the east of the modern drainage system. Reconnaissance auger drilling indicates the cover sequence extends to the west.

Reprocessing of the ground magnetic data has identified NE and NW trending magnetic lows beneath the cover sequence, which have not previously been drill tested. The first phase of auger drilling is being conducted at 400m line spacing, with intervals of 50 to 100m to test for gold dispersion. Results are pending (Figure 2).

Alan Carter, President & CEO, commented, “The Vila Rica program has given us our first indication of just how extensive the transported cover sequence is at Cuiú Cuiú, and the potential for this cover to conceal vein and stockwork style gold mineralization. The identification of stockwork style mineralization, as well as higher grade mineralization at Vila Rica, is a characteristic of the other four deposits with resources thus far identified at Cuiú Cuiú, but perhaps more exciting is the recognition of new targets under post-mineral transported cover identified through reprocessing of the magnetic data. It may well be that the best targets are yet to come as we commence our evaluation of these newly defined trends.” 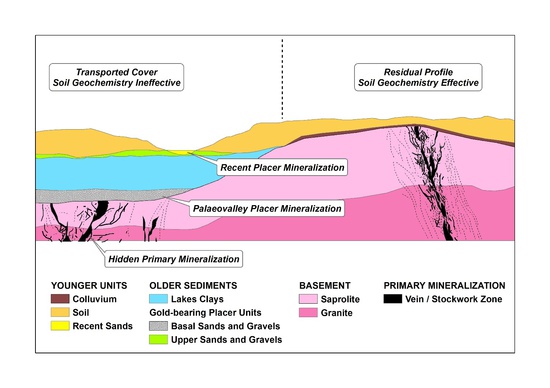 Figure 4: Schematic illustration of the cover sequence. In some areas such as Central and Moreira Gomes, the soil is developed directly above mineralized weathered bedrock and yields a geochemical anomaly. In positions such as Vila Rica, a transported cover sequence is present, and the surface soil geochemistry in not effective at detecting mineralized basement.

The Company owns the Cuiú Cuiú gold project, which covers the largest of the historical placer gold camps in the Tapajós region of northern Brazil, having yielded an estimated 2MMoz of gold from the overall 20-30MMoz gold produced during the Tapajós gold rush2. Placer workings cover over 850ha on the property but are largely exhausted. The few remaining artisanal workers now process gold from palaeo-valley placer deposits and in places exploit high-grade gold mineralization from quartz veins in saprolite (shallow highly weathered bedrock).

Earlier this year, Cabral reported an updated NI 43-101 Mineral Resource Estimate3 totalling 5.9MM tonnes grading 0.9 g/t Au (Indicated) and 19.5MM tonnes grading 1.2 g/t Au (Inferred), or 0.2MM ounces and 0.8MM ounces of gold, respectively. That estimate was based on four deposits drilled prior to the cessation of exploration in 2012.

Gold analysis has been conducted by SGS method FAA505 (fire assay of 50g charge). Analytical quality is monitored by the use of certified references, blanks, and checks higher grade samples checked by FAA525 or screen fire assay. Until dispatch, samples are stored under the supervision the Company’s exploration office. The samples are couriered to the assay laboratory using a commercial contractor. Pulps are returned to the Company and archived. Channel sampling is conducted using a hand-trenching tool over exposed surfaces to maintain a consistent sample. Under the agreement with the Cuiú Cuiú condominium, local artisanal operators can process mineralization to a depth of 30m, unless otherwise negotiated.