Alan Carter, President & CEO stated “These surface results from the new and previously unknown Alonso target located just 3km SE of the MG gold deposit, are truly spectacular and unprecedented in our exploration efforts at Cuiú Cuiú. Whilst I must stress that it is very early days for this target, the fact that we are finding highly anomalous levels of gold in streams up to 1.5km west of the discovery location suggests this target could be very significant. These results, together with our recent drill results from MG and Central, confirm the presence of significant high-grade mineralization at Cuiú Cuiú. I would like to personally congratulate Cabral’s exploration team on the identification of an exciting new target”.

Table 1: Gold values from all rock float samples collected at the Alonso target

In parallel with these drilling efforts, Cabral’s exploration team have continued to explore the wider district via a combination of regional soil sampling, shallow auger sampling and basic prospecting of drainages. The focus of this work has been on the determination of a source for coarse angular gold nuggets in the Cilmar area located 9km to the NNE. The identification of the Alonso target 3km SE of the MG deposit (Figure 1) was a direct result of these regional exploration efforts. 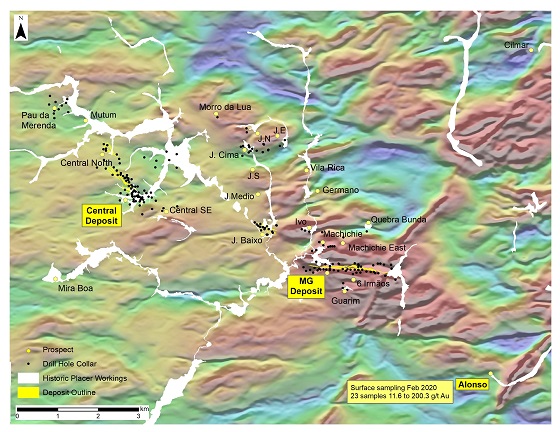 To view an enhanced version of Figure 1, please visit:
https://orders.newsfilecorp.com/files/3900/52255_cabral.jpg

The presence of a significant WSW trending magnetic anomaly and the recent identification of placer gold in the main drainage at Alonso drew Cabral’s geologists to the area. The Cabral team identified the presence of extensive angular quartz vein boulder float with visible gold over an interval of 30m beside the drainage. Twenty-three samples of this float material were collected and returned gold values of 11.6 to 200.3 g/t gold. No samples returned less than 11.6 g/t gold. The concentration of angular quartz vein float material with visible gold suggests that the source could be very close by.

Regional soil sampling of this eastern part of the Cuiú Cuiú Project area during 2007 was completed at 1km E-W line spacing and resulted in a single anomalous sample of 25ppb gold approximately 140m west of the discovery occurrence. Follow up sampling has also identified identical boulders of quartz vein float material on surface from 100 to 950m WSW of the Alonso discovery occurrence associated with the pronounced WSW-trending magnetic anomaly (Figure 2). Assay results are pending on these float samples. More recently stream sediment sampling of streams draining the western extension of the magnetic anomaly has resulted in highly anomalous gold counts and coarse gold nuggets in the pan within stream sediments 1 to 1.5km west of the Alonso discovery occurrence, possibly suggesting it could be a significant mineralized structure. 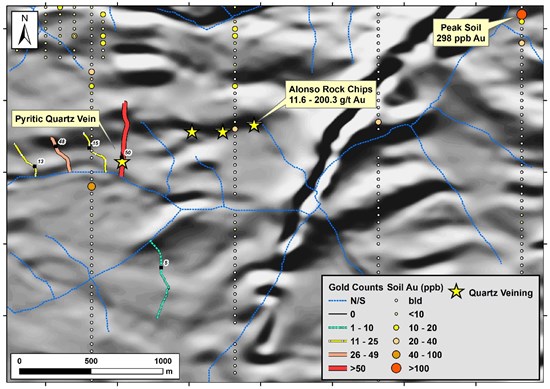 Figure 2: Detailed RTP magnetic map showing of the new Alonso target with location of quartz vein boulders and anomalous streams with gold up to 1.5km to the west.

Cabral’s exploration team is working to determine the size of the footprint of the Alonso target and is engaged in a detailed soil sampling grid over the target as well as more detailed stream sediment sampling. Shallow auger drilling may also be required in advance of drilling in the event that post-mineral cover is identified over the area.

Gold analysis has been conducted by SGS method FAA505 (fire assay of 50g charge), with higher grade samples checked by FAA525. Analytical quality is monitored by certified references and blanks. Until dispatch, samples are stored in the company’s supervised exploration office. The samples are couriered to the assay laboratory using a commercial contractor. Pulps and rejects are returned to the Company and archived. Drilling results are reported as down-hole length weighted intersections. Gold counts in pan concentrates from drainage samples are derived from a set volume (20 litres) of sands and gravels.

Previous Post
Cabral Drills more High-grade Gold at the Central zone at Cuiú Cuiú
Next Post
Cabral provides further results from Alonso target at Cuiú Cuiú; Acquires RC drill rig
Menu
This website uses cookies to improve your experience. If you continue to use this site, you agree with it.
Ok