Mineralization remains open at both ends of the trench

Alan Carter, Cabral’s President and CEO commented, “The significance of these results at Machichie is in their location between the most westerly drill hole at Machichie and earlier trenches excavated a couple of hundred metres further west, which returned 5m @ 8.3 g/t gold. The lateral extent of the Machichie gold system appears to be significantly larger than previously thought. With additional trenching, and drilling about to start in this area, and diamond drilling also in progress at Central, MG and Indio, we anticipate an exciting few months for Cabral’s shareholders.”

The Machichie target is located 500m north of the MG gold deposit (Figure 1). Previous drilling at Machichie identified a persistent mineralized zone which is E-W trending and dips steeply to the north. This main zone consists of a high-grade core zone surrounded by a low-grade alteration envelope. This is very similar to the style of the primary bedrock gold deposits at MG and Central, as well as the recently announced PDM basement discovery (see press releases dated December 15, 2021 and January 12, 2022). 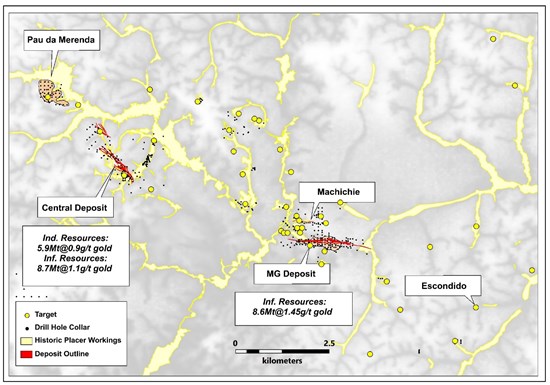 Figure 1: Map showing the location of the Machichie target and the existing MG and Central gold primary gold deposits, as well as the recently identified gold-in-oxide blanket and underlying mineralized zone in hard rock at the PDM target within the Cuiú Cuiú district. Other key targets are shown as yellow circles

In late 2021, Cabral commenced a series of reconnaissance N-S trenches up to 300m west of the known Machichie main zone. Several new mineralized structures were uncovered in the initial trenching including an E-W trending zone in trench CT35A that returned 5m @ 8.3 g/t gold, including 1m @ 37.8 g/t gold. This mineralized structure is 300m west of the most westerly drill hole at Machichie. It is directly along strike from the main mineralized zone at Machichie, suggesting a significant extension to the mineralized zone (Figure 2).

A new trench, CT38A, was excavated closer to the main Machichie mineralized zone (Figure 2), approximately 85m west of the most westerly drill hole at the main E-W trending Machichie main zone. It is also 200m east from trench CT35A, described in the preceding paragraph.

The southern mineralized zone in Trench CT38A is along the strike projection of the mineralization encountered in CT35A and interpreted to further define the western extension of the E-W trending main Machichie mineralized structure.

These trench results lend further credibility to the hypothesis that the main E-W trending mineralized zone at Machichie extends much further west than previously thought. In addition, the presence of a wider zone of lower grade mineralization in trench CT38A (38.6m @ 0.7 g/t gold) to the north of the inferred Machichie main zone extension, also suggests the presence of a significant new mineralized zone that may be NE trending.

Trenching at Machichie is still in progress with diamond drilling scheduled to start in the next few days. Further results are expected on this emerging discovery in the coming weeks. 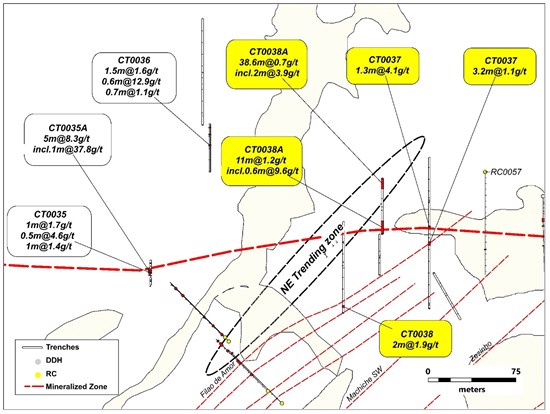 Results are currently pending on six additional trenches totaling 250m at Machichie and the trenching program is continuing.

Results are pending on seven diamond-drill holes at MG and drilling is continuing.

Results are also pending on ten diamond-drill holes at Central and drilling is continuing.

In addition to the extensive diamond-drilling program that is in progress at Central, RC drilling aimed at further defining the extent of the gold-in-oxide blanket material is also in progress. Results are currently pending on 36 RC holes drilled north of Central.

To view the source version of this press release, please visit https://www.newsfilecorp.com/release/119637

Previous Post
Cabral Gold Drills More Bonanza Grades at MG, including 2.6m @ 28.9g/t Gold and 1.6m @ 32.8g/t Gold, within the Cuiú Cuiú Gold District
Next Post
Cabral Gold Drills More High-Grade at Primary Central Gold Deposit and Further Outlines Extensive Gold-in-Oxide Mineralization at Central
Menu
This website uses cookies to improve your experience. If you continue to use this site, you agree with it.
Ok