Vancouver, British Columbia–(Newsfile Corp. – January 20, 2021) – Cabral Gold Inc. (TSXV: CBR) (OTC Pink: CBGZF) (“Cabral” or the “Company”) is pleased to provide an update regarding the current reconnaissance RC drilling at Tracaja and the identification of a compelling new drill target at Indio, within the Cuiú Cuiú gold district in northern Brazil.

Reconnaissance surface sampling at the Indio target returned gold values from quartz-sulphide float material up to 137.8 g/t gold. Reconnaissance drilling is planned during the second half of January
A northeast-trending vein structure has been identified in reconnaissance drilling at the Tracaja target where a total of seven reconnaissance RC holes have been completed to date. Nineteen surface grab samples collected from the edge of historic placer workings at Tracaja in November 2020, returned gold values of 24.2 g/t to 165.0 g/t gold and averaged 74.9 g/t gold
Alan Carter, Cabral’s President and CEO commented, “The identification of high-grade quartz-sulphide mineralization on surface at the Indio target, with values up to 137.8 g/t gold, is very encouraging and will be tested by reconnaissance drilling over the next couple of weeks. Similarly, the identification of a NE-trending mineralized vein system at Tracaja is significant and gives us a mineralized structure that we can now trace along strike and down-dip in order to determine which part of the structure is the source of the high-grade blocks found on surface. It is important to note that our reconnaissance drill program continues in parallel with follow up drilling using a larger contract RC rig which is having excellent success at the Machichie target. The Cuiú Cuiú district was not the largest placer gold area in the world’s third largest placer gold region for no reason, and our exploration program is only just starting to reveal the grade and size of this exciting gold district.” Results were received from several new surface grab samples at the undrilled Indio target which is located approximately 1.5km SE of the MG gold deposit and 2.5km NW of the Alonso gold target (Figure 1).

Previous results from surface float samples at Indio ranged from 1.5 to 52.6 g/t gold and results from quartz-sulphide samples (see Figure 3) taken from a new area 200m to the northwest where a submerged vein is reported, returned values of 7.7, 9.7, 13.3 and 29.3 g/t gold. A sample taken slightly to the south of a previous sampling site returned 137.8 g/t gold (Figure 2). The strike of the vein is reported to be ENE, subparallel to a significant gradient which forms a lineament in the magnetic data.

Reconnaissance drilling at Indio with an initial six holes targeting the historic workings, will commence within the next few days. 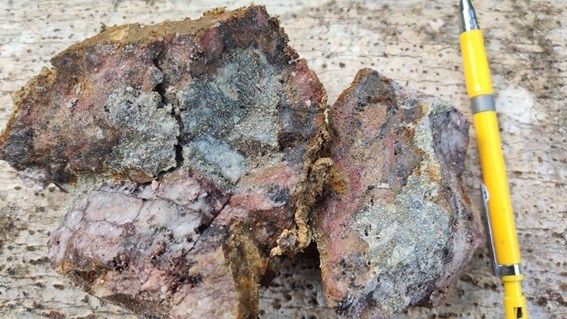 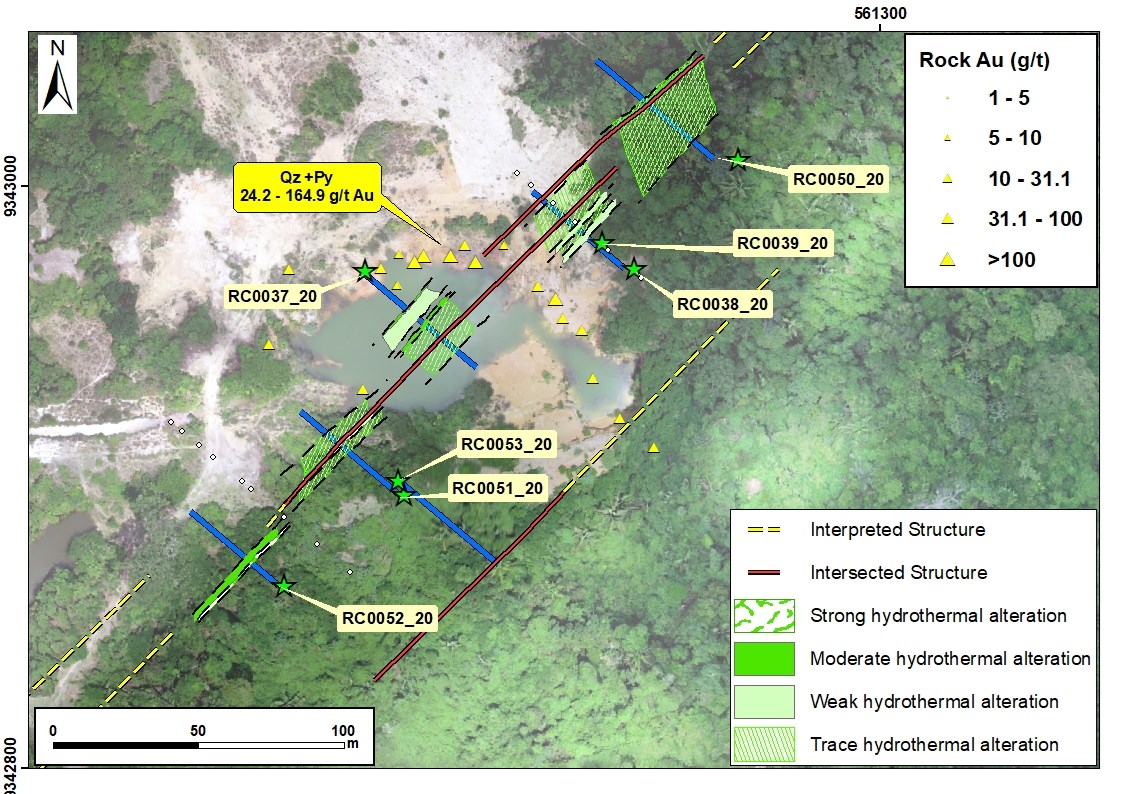 Mineralized samples identified at Tracaja are associated with historical alluvial placer workings. The Tracaja area was extensively worked over a 950m portion of the NE-trending drainage system, with the workings emanating from a position where the now-established NE-trending vein structure is cut by a concealed E-W structure which is evident from the airborne magnetic data (Figure 4). This part of the Cuiú Cuiú gold district has never received the detailed ground-magnetic follow-up. Ground magnetics was effective in assisting targeting within the core part of the project area, where the Central and MG deposits were delineated. A ground magnetic survey will be completed prior to Phase II drilling at Tracaja. 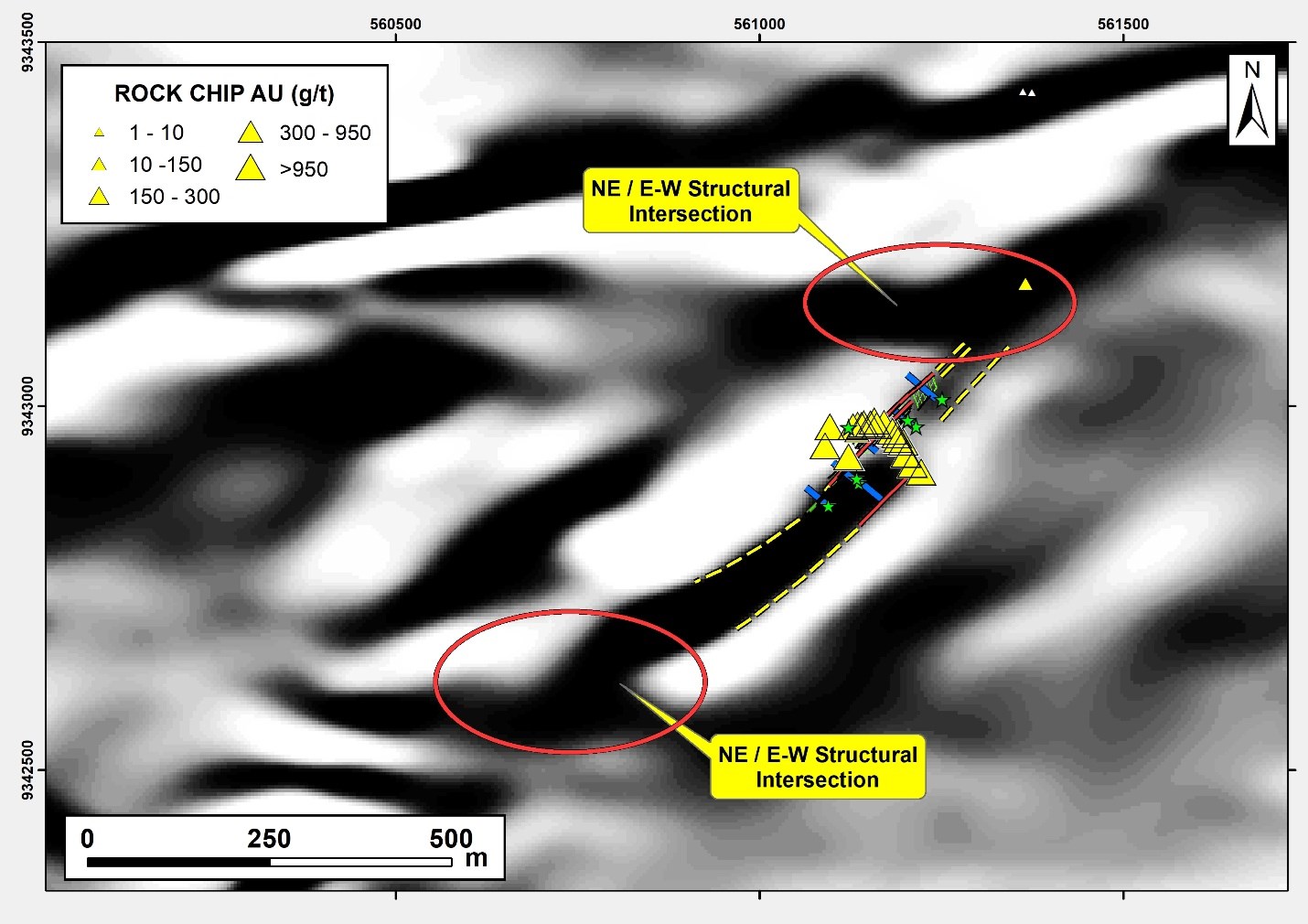 To view the source version of this press release, please visit https://www.newsfilecorp.com/release/72372