Alan Carter, Cabral's President and CEO commented, "These very high-grade results from initial step-out RC drill holes at the Machichie target at Cuiú Cuiú, confirm our belief that Machichie is a significant mineralized zone, and in all likelihood, the third significant gold deposit within the Cuiú Cuiú district. The grade and width of the mineralized intersection in hole 40-20 is the best we have seen so far at Machichie, and these holes significantly extend the mineralized zone to the east. Further drilling along strike and down dip will clearly be required to fully determine the size of the Machichie discovery. The reconnaissance drilling at Medusa has also intersected a new mineralized zone at depth which is very encouraging and will require follow-up drilling. With two rigs currently drilling, and an aggressive surface exploration program in progress at Cuiú Cuiú, we look forward to a steady stream of results during the first half of 2021". 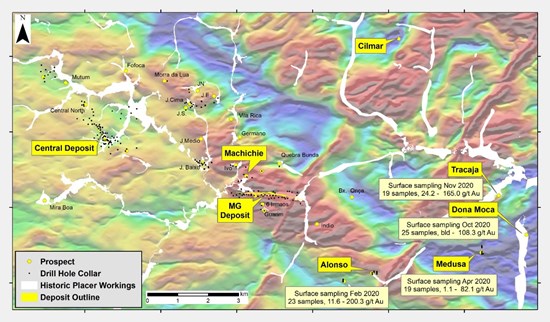 Figure 1: Cuiú Cuiú location map showing the location of the Machichie target in relation to the 43-101 compliant MG and Central deposits and the recently identified Cilmar, Alonso, Medusa, Tracaja and Dona Moca targets

The current follow-up RC drill program is designed to determine the extent of the mineralized zone at Machichie and the initial two step-out holes (RC 40-20 and RC 41-20) were completed in December 2020 prior to the end of year break to test the eastern extension of the mineralized zone. A series of NE-trending mineralized vein structures (Machichie SW vein array) converge with the E-W trending corridor and will also be targeted as part of the ongoing drill program. 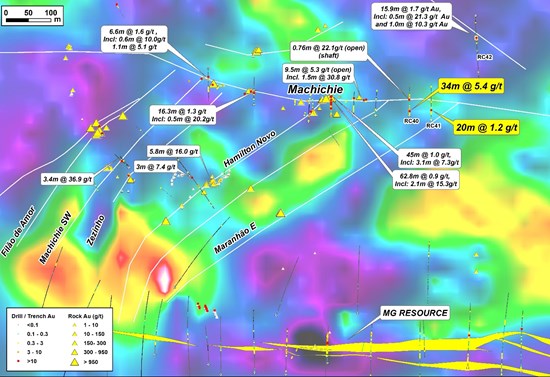 These initial drill results from the step out holes are highly encouraging and indicate that the mineralized zone at Machichie not only continues along strike to the east of the previous drilling, but is open and includes significant zones of very high-grade gold mineralization. Further drilling is planned at Machichie to test both the E-W trending corridor and the NE-trending vein structures at Machichie SW from January 2021 onwards. Drilling to date on the Machichie main E-W zone has so far confirmed gold mineralization over a 500m strike length and is open.

Results were returned on twenty-one reconnaissance RC holes (holes 16-20 to 36-20) which were drilled at the Medusa target (Figure 1). These were drilled in two N-S oriented traverses aimed at identifying the mineralized structure which is the source of two groups of surface boulders that were collected 350m apart and returned gold values of 5.2 to 50.1 g/t gold in the west and 1.1 to 82.1 g/t gold in the east (Figure 3).

The most significant intercept was returned from the final hole of the program (RC 36-20) at Medusa which was drilled immediately north of the eastern-most boulder train and intersected a broad low-grade zone of gold mineralization and a 1m section from 83.0m depth returned 1.0 g/t gold directly underneath the eastern most set of boulders which range from 1.1 to 82.1 g/t gold. This intercept is encouraging and will require follow-up drilling of the structure immediately to the east and west. Variably disseminated pyrite was present across the broader interval of 19.0 to 63.0m associated with weaker mineralization, indicating the presence of a broad alteration system. Medusa has a broad geochemical gold-in-soil anomaly associated with an extensive magnetic low in an area of poor exposure, with the drilling at an early reconnaissance stage. 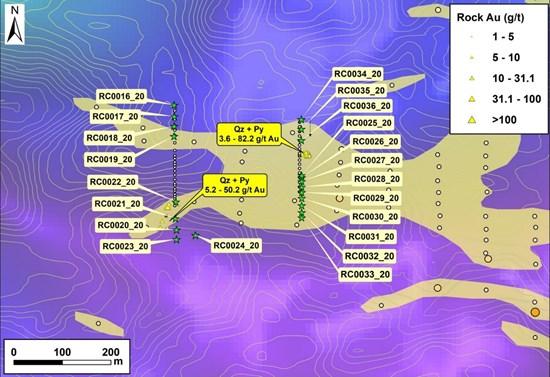 Figure 3: Detailed map of the Medusa target showing extent of gold-in soil anomaly and location of surface float samples and the two lines of reconnaissance RC drill holes. Note the location of hole RC 36-20 with respect to the surface samples grading 3.6 to 82.2 g/t gold

Results are currently pending on six holes completed at the Tracaja target prior to the end of year break and drilling has recommenced on this target. An update regarding the drilling at Tracaja will be released shortly and results are expected within the next few weeks.

Surface reconnaissance work is also continuing in a number of different target areas at Cuiú Cuiú with results expected over the next few weeks.

Gold assays have been determined by SGS method FAA505 (fire assay; 50 charge). Analytical quality is monitored by certified references and blanks. Until dispatch, samples are stored in the Company's supervised exploration office. The samples are couriered to the assay laboratory using a commercial contractor. Pulps and rejects are returned to the Company and archived. Intersections quoted are down-hole widths. RC samples are split using a Jones riffle splitter, and have been recovered in a dry condition using a face-sampling bit, with the program executed by GEOSEDNA - Perfurações Especiais S/A, specialist drilling contractors. Sampling has been conducted in 1-2m intervals, based on geological control.

To view the source version of this press release, please visit https://www.newsfilecorp.com/release/71498