Vancouver, British Columbia–(Newsfile Corp. – February 12, 2019) – Cabral Gold Inc. (TSXV: CBR) (OTC Pink: CBGZF) (“Cabral” or the “Company”) is pleased to announce an update of its initial drilling program, as well as assay results from rock chip and auger drilling sampling of the Quebra Bunda target at the Cuiú Cuiú Project, located in the state of Pará, in northern Brazil.

Six diamond drill holes have so far been completed on the initial high grade Machichie target at Cuiú Cuiú where surface sampling has returned values of 52.5 g/t gold over 0.9m and 23.8 g/t gold over 1.35m. Individual grab samples have returned values up to 356 g/t gold. The targeted structures have never been drill tested.

Of the six holes completed thus far at Machichie, five holes were drilled from three locations over an E-W strike length of 275m to test the central part of the main Machichie structure. One of the five holes was lost at 40.5m depth and a subsequent hole was successfully drilled from the same location.

Laboratory results are pending on all of the above holes. Drilling is currently in progress at the Machichie East target where a significant Cu-Mo-Au anomaly has been identified from a program of shallow auger drilling.

The Quebra Bunda target is situated 1km to the north of Cabral’s MG resource (Figure 1). It is located in a geological domain adjacent to the NW trending Tocantinzinho Lineament where the Company has recently defined several new high-grade gold targets from rock chip and channel sampling programs[1]. This prospective crustal block is associated with multiple parallel E-W trending structures, marked by corridors of demagnetization in the otherwise strongly magnetic granite basement. These structures are largely concealed beneath soil and transported cover. The artisanal workings locally penetrate the cover sequence and provide useful windows into the basement for sampling. 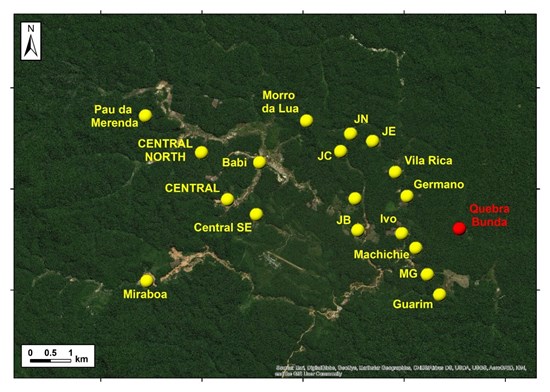 Figure 1: Location of Quebra Bunda in relation to target areas under evaluation for exploration and resource development in the Cuiú Cuiú Project area

The Quebra Bunda artisanal working is marked by an area where the modern alluvial drainage has been more intensively processed. It is located on the northern flank of a prominent E-W trending magnetic low (Figure 2). Historical surface soil geochemistry has defined anomalous areas in the range of 50 – 308 ppb Au along the projection of the E-W structure, and along NE-trending structures to the south which converge into the E-W trend (Figure 2). The peak soil anomaly in the vicinity of the Quebra Bunda prospect is 244 ppb Au. 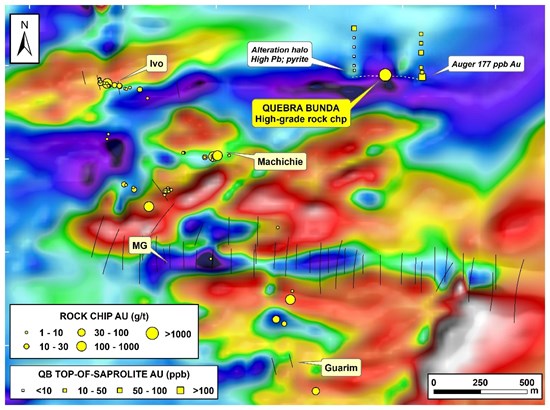 Figure 2: Location of the Quebra Bunda rock chip and auger samples in relation to the E-W demagnetised corridor

A recent program of auger drilling in the area was designed to test for saprolite gold mineralization along the demagnetized corridor and returned a highly anomalous auger sample result of 177 ppb Au approximately 200m east of the Quebra Bunda prospect. A follow up line of auger sampling 175m to the west, returned anomalous gold colors in panned samples as well as abundant fine pyrite grains suggesting the Quebra Bunda structure extends over a minimum strike extent of 365m and is open to the east and west. The sample was anomalous in lead (a pathfinder element to mineralization) and is interpreted to have intersected the alteration halo of the structure. The auger drilling indicates the presence of a transported palaeovalley sequence covering the structural extensions. The palaeovalley sediments are believed to be subduing the surface geochemical response. The under-cover structural trend is open beyond the limit of auger drilling.

The original alluvial workings date from the 1970’s when gold was worked in the sediments manually by hand panning and sluicing. Recently, the pit was temporarily dewatered by the artisanal miners to access remnant alluvial material, which provided an opportunity for the Company to better access the available exposures of weathered bedrock on the southern side wide wall, where a subvertical shear zone had been identified. Channel sampling in the narrower upper part of the structure indicated the structure was gold-anomalous (0.12 – 0.25 g/t Au). The recognition of any mineralized structure in conjunction with alluvial workings in the Tapajos requires careful evaluation given the discovery history of deposits such as the Palito mine where high-grade structures can taper to have quite subtle surface expressions.

The pit, when dewatered, provided an opportunity to view a better vertical section of the shear. The shear expanded to a width of 1m at depth and contained an increasing abundance of iron-staining and box-worked quartz veins (Figure 3). A composite rock chip sample across this lower part of the vein returned an exceptionally high-grade result of 3,727 g/t Au (119.8 oz/t Au).

To view an enhanced version of this graphic, please visit:
https://orders.newsfilecorp.com/files/3900/42767_4021e4fbebeb_07full.jpg

The east-west trend of the vein trends parallel to the demagnetized zone. The closest drilling along the strike of the trend is located over a kilometer away, to the west at the Ivo prospect. Peak drill results from historical drilling at Ivo included 6.1m @ 3.4 g/t Au, but much of the drilling has been directed into a WNW-trending splay off the main structure. Hole CC_172_12, which traversed part of the magnetic low to the east, displayed strong hematite alteration to the limit of the drilling. The mineralized structures in the district display transitions from hematite to quartz-sericite alteration along and across strike.

Alan Carter, President & CEO commented “We are encouraged by the drilling thus far at Cuiú Cuiú and the initial Machichie target and look forward to receiving the drill results. The recent results from the Quebra Bunda target, which is located 1km north of the Moreira Gomes deposit, also highlight the prospectivity of the E-W structural trends at Cuiú Cuiú and add further credence to the potential for high- grade mineralization associated with prominent E-W trends observed in the geophysical data”.

The Company owns the Cuiú Cuiú gold project, which covers the largest of the historical placer gold camps in the Tapajós region of northern Brazil, having yielded an estimated 2MMoz of gold from the overall 20-30MMoz gold produced during the Tapajós gold rush. Placer workings cover over 850ha on the property but are largely exhausted. The few remaining artisanal workers now process gold from palaeo-valley placer deposits and in places exploit high-grade gold mineralization from quartz veins in saprolite (shallow highly weathered bedrock).

In 2018, Cabral reported an updated NI 43-101 Mineral Resource Estimate totalling 5.9MM tonnes grading 0.9 g/t Au (Indicated) and 19.5MM tonnes grading 1.2 g/t Au (Inferred), or 0.2MM ounces and 0.8MM ounces of gold, respectively. That estimate was based on four deposits drilled prior to the cessation of exploration in 2012.

Composite rock chip samples are taken across vein structures along a horizontal level to produce a samples typically 3 – 5 kg in weight, and are taken where rock competency or access constraints prevent the channel sampling technique with a trenching tool. Samples are sent to SGS for preparation (method code PRP102_E – crushing to 3mm, quartering, and pulverising to produce a 250-300g pulp with 95% passing 150 mesh). Gold analysis has been conducted by SGS method FAA505 (fire assay of 50g charge). The high grade sample was checked by FAA525 (reported value). Analytical quality is monitored by certified references and blanks. Until dispatch, samples are stored under the supervision the Company’s exploration office. The samples are couriered to the assay laboratory using a commercial contractor. Pulps are returned to the Company and archived. Under the agreement with the Cuiú Cuiú condominium, local artisanal operators can process mineralization to a depth of 30m, unless otherwise negotiated. Historical drilling results are reported as down-hole length weighted intersections unless otherwise stated.

Previous Post
Diamond drilling advances at the Machichie Target, Cuiú Cuiú Project. Channel sampling returns 52.5 g/t Au over 0.9m and 23.8 g/t Au over 1.35m
Next Post
Cabral cuts 3.4m @ 36.9 g/t gold in Machichie Drilling and Announces the Discovery of a New High-grade Zone at the Cuiú Cuiú Project, Brazil
Menu
This website uses cookies to improve your experience. If you continue to use this site, you agree with it.
Ok