Alan Carter, Cabral’s President and CEO commented, “The results from DDH239 confirm the presence of a significant zone of primary gold mineralization in the granitic rocks directly beneath the gold-in-oxide blanket at PDM. These results come soon after the results from DDH238 located 120m to the SE, which returned 22.4m @ 4.8 g.t gold and indicate continuity of the mineralized zone along strike. On the basis of these results, we have taken the decision to expand the diamond drill program at the PDM target and we look forward to further drill results from this exciting new mineralized zone at Cuiú Cuiú. In addition, the presence of gold-in-oxide mineralization over 100m east of the current eastern limit of the gold-in-oxide blanket at MG, opens up the possibility of significant additional oxide mineralization further to the east than previously thought”.

The PDM (Pau de Merenda) target is located 2.5km NW of the Central gold deposit at Cuiú Cuiú (Figure 1). Following the identification of an extensive gold-in-oxide blanket at PDM earlier this year (see press release dated August 10, 2021), a program of diamond drilling was initiated in order to test for the presence of an underlying zone of primary gold mineralization in the granitic basement rocks. 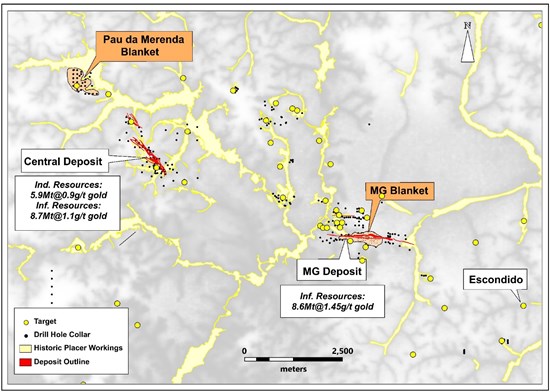 Figure 1: Map showing the location of the PDM and MG gold-in-oxide blankets and the existing MG and Central gold primary gold deposits as well as other key targets (yellow circles) within this part of the Cuiú Cuiú district

This latest result at PDM indicates that the mineralized zone at PDM can be traced along strike to the NW, which is highly encouraging. As a result, Cabral is planning on drilling 13 additional diamond-drill holes totaling approximately 3,000m in order to determine the continuity and limits to the mineralized zone.

Thus far, a total of eight diamond-drill holes have been completed at PDM as part of the current program, and results are currently pending on three additional holes. Drilling is continuing. 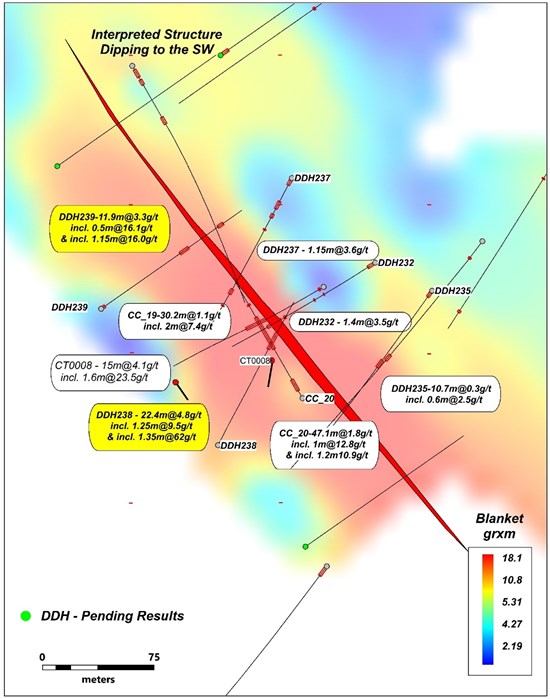 RC262 was drilled near the eastern limit of the MG deposit on section E554180 (Figure 3). It returned 4m @ 0.1 g/t gold from 9m depth and 3m @ 0.7 g/t from 46m depth. Both intercepts are in oxide material. Historic hole CC76 was drilled approximately 45m to the SSE and returned 19.8m @ 0.8 g/t gold within oxide, and RC261 was drilled 67m to the ENE and returned 13m @ 0.2 g/t gold within oxide (Figure 3). All of these holes are located more than 100m east of the eastern limit of the gold-in-oxide blanket as it is currently defined, and indicate that additional gold-in-oxide blanket mineralization could exist significantly further to the east and southeast than previously envisaged. 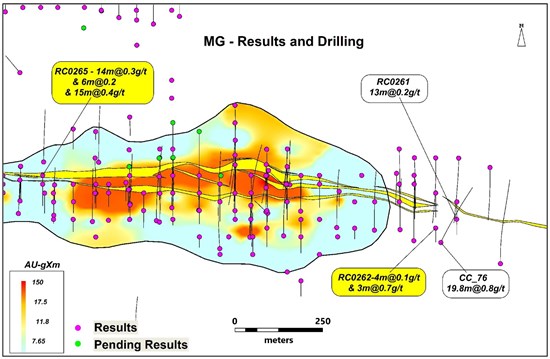 Figure 3: Map showing the location of RC 265 and RC262 within the gold-in-oxide blanket at MG. Note the location of RC262 and earlier holes RC261 and CC76 and gold intercepts well beyond eastern limit of currently known blanket

Diamond drilling is re-starting at the primary Central gold deposit following the Christmas and New Year break. Central is located 2.5km SE of the PDM target (Figure 1). Assay results are currently pending on eight holes from a total program of 43 planned diamond-drill holes at Central. These are designed to further define the high-grade zones at Central.

RC drilling at Central will also recommence shortly with the objective of testing for the presence of gold-in-oxide blanket mineralization above the primary Central gold deposit. Results are currently pending on 12 RC holes completed in 2021.

Diamond drilling at the primary MG gold deposit, which underlies the recently identified gold-in-oxide blanket at MG, will continue shortly. Results are currently pending on an additional ten diamond-drill holes completed in 2021. Significant assay results from all RC holes completed at MG in 2021 have all now been reported.

To view the source version of this press release, please visit https://www.newsfilecorp.com/release/109858

Previous Post
Cabral Gold Reviews 2021 Achievements and Outlines Plans for 2022 at Cuiú Cuiú Gold District, Brazil
Next Post
Cabral Gold Drills 55.1m @ 1.1 g/t Gold Including 5m @ 6.1 g/t Gold, and Identifies a Third Gold-in-Oxide Blanket Within Cuiú Cuiú Gold District
Menu
This website uses cookies to improve your experience. If you continue to use this site, you agree with it.
Ok